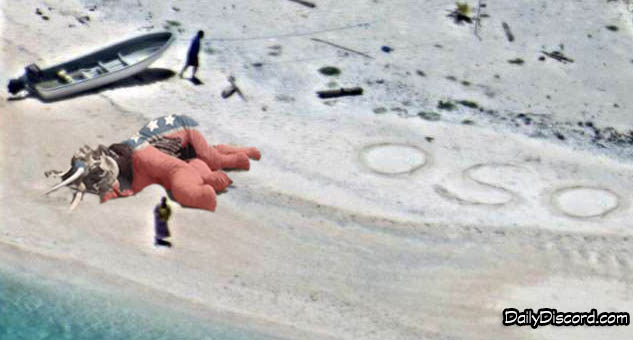 Sure it’s been fun watching the Republican establishment squirm to defend the indefensible, but I continue to question the viability of this not-so Grand Old Party. I just want them to go away at this point. I know, I know, that sounds a bit extreme, but so are they. Nearly half our country is reaching a dangerous level of political ineptitude. How do these so-called ‘staunch   constitutionalists’ continue to perpetrate the most egregious affronts to our civil liberties? Republicans championed the roll back of Dodd-Frank, the Voters Right Act, the Patriot Act, and Citizens United. And, in their spare time, they continue to chip away at women’s rights. These guys are to the Constitution as mold is to bread. Fox & Fungi?
On the flip side, their inherent hatred of liberals seems wholly linked to an emotional response. At least from my experience, Republicans report an inexplicable ‘feeling’ that Dems are up to no good. This notion tends to guide their entire political reality.
Fun Fact:
After flushing, the Republican ideology actually swirls in the opposite direction in the southern hemisphere.
Which candidate would guard the Constitution more effectively? Do you really believe a President Trump will honor the system of checks and balances?  This bully? This guy who would perpetually browbeat the Senate Majority Leader and the Speaker? The guy who will effectively become the 10th Supreme Court Justice …well, after he makes Sheriff Joe Arpaio the 9th. Checks and balances …you’re doing it wrong. Sure, Trump will write checks, depending on his balance, but he’ll never actually mail said check, especially if it’s a donation to veterans or those he owes money to. In his defense, where do you find a big enough envelope for those freakishly large ones? My mailman would be pissed, especially when he’s trying to outrun my dog.
I can’t wait for some of the related Trump headlines:
Trump’s 17th Speaker of the House Poisoned! Trump Blames Putin While Winking & Praising Putin
They’ll be so desperate by year two, Republicans will probably try nominating that guy from Law & Order. Wait, I’m being told he already ran for president and since died.
I don’t know who you think the bad guys are Tea Peeps, but you might want to look in the mirror. Clearly others believe the advent of Trump signifies the bottom of their party’s decent. I remain skeptical. Have you seen Trump’s latest Tweet? That’s rhetorical. George W. Bush functioned on a high school level of consciousness, Palin was pure middle school, and The GOP has now skipped grade school to a charismatic presidential toddler. Your party is a sick joke. Why defend this guy?

“The way most Republicans have decided to resolve their dilemma is to criticize him (Trump) for the more vile things he says and does, while still maintaining their support for him. It may not be the most principled of stands, but it’s enough to let them sleep at night. And if Democrats ever found themselves in the same position, it’s probably what most of them would do too. Fortunately, they’ll almost certainly never have to face that choice.”

I don’t agree with Waldman’s last bit. Have you talked to a Sander’s supporter lately? Some are reeling themselves in, but a there remains a significant portion of enraged outliers. Make no mistake, the descent of the Democratic party has begun. Whereas libs remain light years ahead of their clueless counterparts, the gap is quickly closing. I maintain there’s nothing worth saving amidst the Republican platform. You have all been off your meds for too long. The gibbering babble you call an ideology is in desperate need of a certain form of psychosurgery (banned since 1977). Paging Nurse Ratchet! The conservative brand can be summed up with this simple all-or-none thinking chart.

Is there really anything else they have added to the 21st century public discourse? And, yes, it does spell batshit. I didn’t plan that. (Fine, I would have gone with capitalism not hegemony, but you get the idea).
Here’s the other problem with this brand. The GOP has splintered into four squabbling factions:
1. The Fundamentalists: the Falwells and Robertsons of the world.
2. The Failed Supply Side Economists: the Laffers and Krystols of the world.
(Yes, the father of trickle-down is named Laffer.)
3. The Chicken Hawks: the degenerates who brought us the invasion of Iraq.
4. The Trumpster Divers: all those bigots, xenophobes, misogynists, and anti-intellectuals who comprise the Trump base. 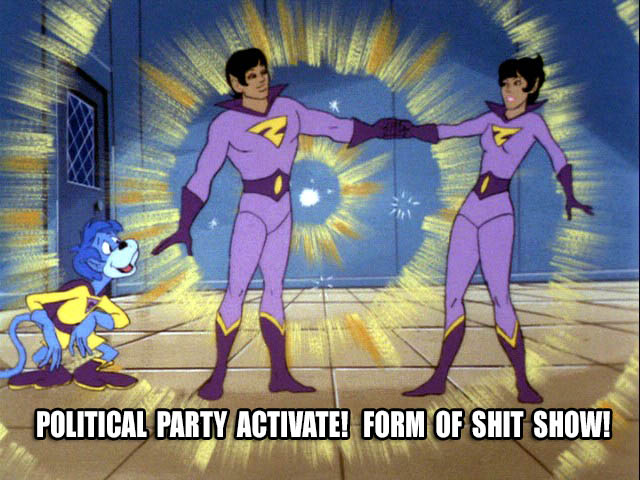 So which batshit brand are you? No, no, you have to pick. Sure there are some moments of sanity from the libertarian end, but generally it’s not enough to say it’s the sane vs insane when each faction seems less insightful than the next. There is no longer any group to point to as an authority. I realize many republicans are stepping away from Trump and therein lies hope, but as far as republican reform? There is little evidence they’re moving away from delusion. George W. Bush remains the worst president in my lifetime and, yet, his peeps are the closest to intellectual as this bunch gets. One reason? The Bushies and company are more inclined to vote Hillary in 2016. Even Paul Wolfowitz, the architect of the botched Iraq occupation, is ready for Hillary here. Sadly, Charles Krauthammer and the rest of the neocons are the sharpest tools in this very dilapidated shed. They botch everything and come equipped with the prognostication skills of a potato, but at least they’re semi-lucid. Of course, I always like to point out the person who made the best case for a broader war in the Middle East was the late great Christopher Hitchens. After hearing Hitch speech even yours truly, a pacifist, used to admit to being “ready to bomb the Amish.” Yes, even amidst their own bailiwick, a non-republican made the strongest case for war. Can you spell incompetence? Your nominee probably can’t. Whereas I agree with Hitchens’ overall premise that we have irreconcilable ideological differences with that region, to the end he remained very dismissive of the notion that reform would need to stem from some type of Muslim reformation. This was at the heart of his debates with Galloway, here. This was, perhaps, his greatest oversight.
Republicans want us to believe they have the best policies, strategies, and overall ideology, but they simply lack people with the intellectual prowess to accurately express these views. Say it with me, folks: 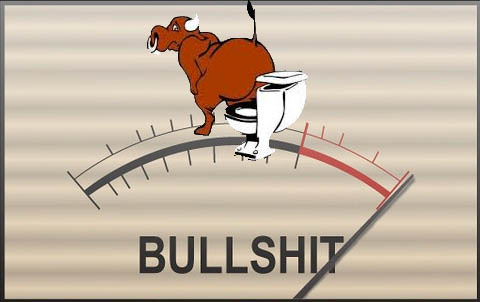 At this point I am not that keen on throwing a life preserver to this crowd. After all, no one in my personal life has even identified the need for Republican reform (save on a good day, Pokey). Years ago I called for the GOP to wake the F up, but now, like my crazy X, it’s time to file that restraining order. If conservatives were capable of something called insight, who knows? Maybe this Trumpian cellar could be a clear demarcation of their combined depravity …again, I doubt it. If they had a clue, they could even use the Trump phenomenon to effectively weed out those anchors and entertainers too ridiculous even for The GOP. Oh, that’s right, you’re against weed too.

Irony Alert: Republicans are against weed, but pro Round Up.

Thankfully, there is considerable pressure on those continuing to blindly support this abomonomination. Ann Coulter and Sean Hannity come to mind. Heck, even Rush Limbaugh is cooling to Trump here, and do you know how much opiates it takes to calm Rush down? Someone better alert Endo Pharmaceuticals. I think Hannity is hurting the most. If his tent gets any smaller he’s going to need some serious Vitamin E. I think kicking Hannity off Bullshit Mountain would be a great first step to clearing the air. Then again, if we shovel all the fertilizer from the Crappalachians, what will remain? Valley of the Turds?