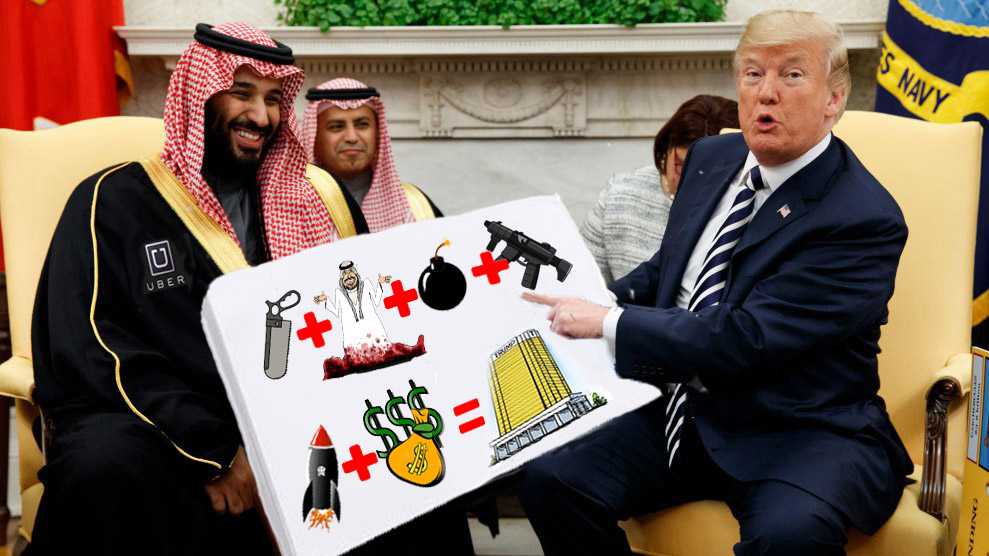 Tweet Tower—In what many are calling a brutally honest assessment, president Trump laid out the details of his latest business dealings with the Saudi royal family. The president has successfully bypassed congress to finalize an eight-billion dollar deal that will allow Saudi Arabia to get more smart bombs, drones, missiles and weapons for the purpose of helping Al Qaeda and other Sunni terrorist groups as well as aid in the final stages of the genocide of the Yemeni people, or “win win” as the president put it.

Many are calling the meeting an important exchange of ideas. The Saudis asked for tips on how to further delegitimize the media in the age of the internet and the president wanted to know, hypothetically, how to chemically dispose of a body from a high profile establishment. Those close to the president feel the two crime families are finally starting to see eye to eye, or eye for an eye, or whatever violent passage matches both the Koran and the Bible for any given criminal activity.

The president allegedly wanted to be even more honest with the American people by adding a little cartoon of all the resulting dead Yemenis, but, according to a senior staffer, “The executive cartoonist couldn’t fit the extra pile of corpses onto the poster board,” but he then added, “Maybe next time.”

In related news, Awkward Moment As Saudis Dispatch Pompeo Back To Turkey With Bleach And Gloves