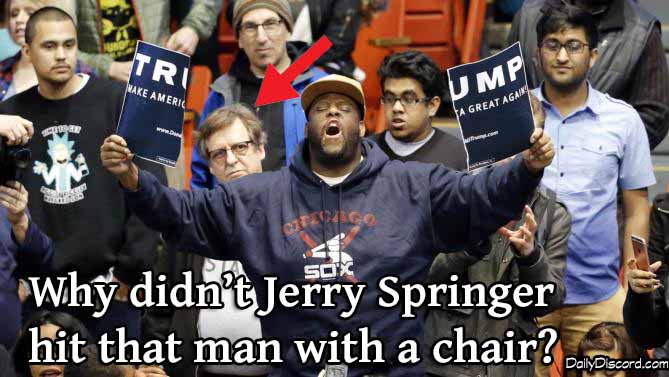 Chicago, Il—Last night Republican presidential candidate Donald Trump canceled his Chicago rally due to safety concerns. Trump was not happy with the number of protestors in the audience. The Chicago Police Department insisted they had a sufficient ratio of batons to black skulls and encouraged Trump to proceed with the event and antagonize minorities as he saw fit. After Trump canceled the rally, the ensuing chaos left the people of Chicago confused and disappointed. This iconic image captures the inaction of Chicago TV personality, Jerry Springer, not stopping a gentleman from damaging an article of Trump property (made in China).
Donald Trump said, “The Chicago Police Department screwed the pooch on this one. They screwed the pooch. There were tons of black people in the audience; they should have been turned away at the door. I feel bad for my supporters. Some of them came thousands of miles…thousands of miles, just for the chance to hear me speak and f^&k with some protestors. Now they’ll have to drone on with their pathetic little lives without me. It makes me sick.”
Jerry Springer’s inaction has clearly tarnished his reputation. Trump voiced his disappointment with the television host, “You’re Fired, Mr. Springer! What a joke. Your whole life you watched these battles playout and this was your moment to pick up a chair and crack it over that guy’s head! You blew it, you little dweeb. Chicago should banish you to Gary Indiana, or better yet a Sanders rally…in Gary Indiana.”
Trump is denying allegations he placed bets on his supporters when they were clashing with protestors. “That’s bullshit! But I am moving ahead with a video game, Trump Protest 4. I want to jump right to 4, because it sounds cooler. I have people working on it now. The best video game people. The best.”