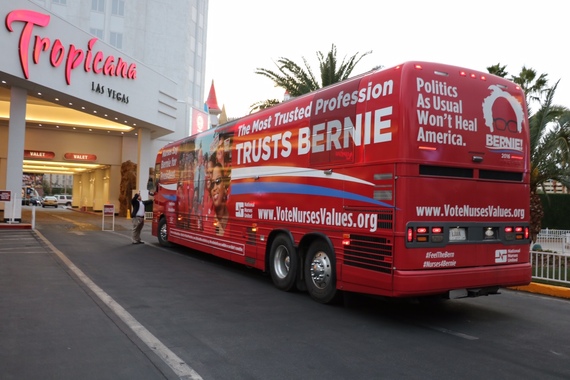 The Sanders Campaign realizes they’re mathematically toast, but Bernie is insisting his zombie campaign continues to stagger aimlessly around the country in search of more young brains. Sanders told reporters today, “Remember those walkers from the Walking Dead? This is nothing like that. It’s a terrible analogy.” Some of Bernie’s closest advisors are admitting he really enjoys getting 27 dollars from people all over the country, so he can travel around with his wife on what he is calling a “second rallymoon”. Senator Sanders told the Discord today, “What I think we need to do is this: I will end the campaign today, if the American people promise to keep sending me more money anyway. That is a good compromise. Unlimited continued funding would be a future I can believe in.”

Sanders enjoys touring around to the screams of adoring fans. “You know there are droves of hot young Bernie groupies out there. Droves. And one of them even threw a bra at me in San Jose. Now, I want to make this clear, I do not want to go down the same road as Bill Clinton… I was thinking anal. Ha! Look, as a senator from Vermont I spent most of my time over the last decade fund raising. It’s a tiny little state and most of this tedious task is done over the phone. If I concede, I will have to return to this endless tele-legislating. I won’t be able to drive around to rallies all over the country and party like it’s 1899. Who is going to give a senator from Vermont money at a rally in Montana? No one! Besides, it’s not over until someone throws some panties at me.”

Close advisors are encouraging Senator Sanders to seek help for his concerning campaign addiction. Sanders replied, “I am considering a 28-day program, but only if they are willing to change it to a 27 day program, in honor of my average donation. Feel the Bern, not the burn!  They can have that one for free. Oh, and they must make addiction treatment free for all Americans. They can start with me, because I’m broke. Sure I want to break this campaign addiction, but for now I want just one more fix in Washington. They love me up there. Panties, people! Panties or bust! Oh, and I am also on meth. How else do you think an old man can run all around the country 24/7.”