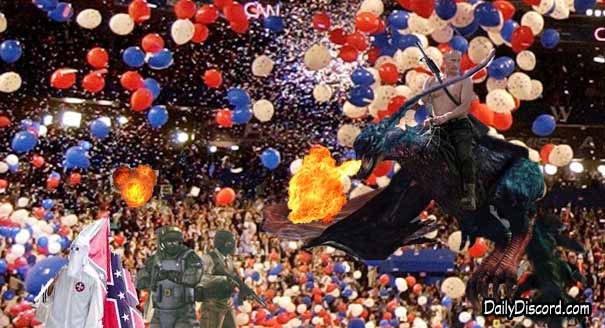 Washington, DC—The head of the Libertarian Party, Gary Johnson, is suggesting one more combined convention to kind of “clear the air a bit” and settle some important scores. “I think it’s really important to allow people to vent,” said Johnson. “When we had a disagreement back in the day, my father used to just let my brothers and I duke it out on the front lawn …with semi automatic weapons. It builds character.”

Critics are calling the move an obvious ploy to eliminate the competition. “Johnson is acting like a real peter on this one,” said Senator John Q. Republican. “I think it’s safe to say he’s calling for mutual genocide. Besides, I’m afraid such a reckless idea is only going to gain support from my side of the aisle.”

President Obama has also weighed in on the unusual request. “I must admit, I do like the idea of a combined convention, but I’m afraid my side would likely be bringing a knife to a gun fight. So, if this event happens, I have asked the Secret Service to favor the Democrats during any shoot outs. Michelle is also more than willing to take down Ivanka Trump and I think that would be some great entertainment for the folks at home.”

Republican presidential nominee Donald Trump replied to the President. “If you get the Secret Service, Mr. Obama, than we get the KGB and the KKK! Fairs fair. I am also requesting that Putin ride in on a dragon, naked to the waist. God, that would be so hot. Please don’t print that, but it would be. It would be hot.”