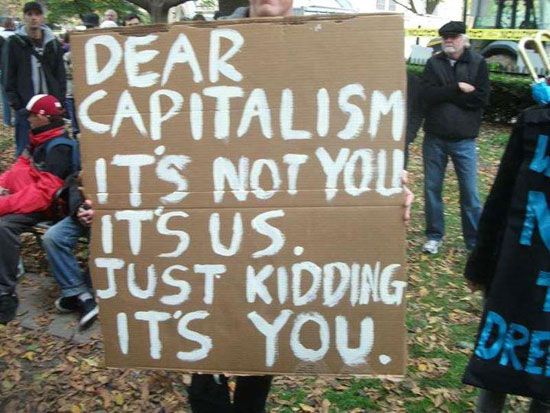 “Outrage is a business and it’s feeding a product. It’s supplying a product to people who want to be angry, and want to be even more angry about politics.”  —Jeff Berry, Tufts University

I guess such identity politics gins-up both sides of any debate because we, as humans, are primed to embrace tribalism and rail against the perceived opposing side. It reminds me of that line from RoboCop, “Good business is where you find it” …except in this case, of course, it’s a very bad business …one that has had a chilling impact on our world. A lot of awful people got rich stoking these divisions. But we know who tilted the old pinball machine, don’t we? The same one in the basement of that basementless DC pizzeria.

A republican then adds his own two cents to the matter, which, as it turns out, is never worth that much (even accounting for inflation):

Yeah, they’re basically the same …like how a guppy and a tiger shark are both basically fish. And this flippant statement misses the whole how-we-got-here part, presumably, because it directly involves you, congressman.

For a brief recap of the death of information: we shifted from Cronkite to the Sinclair Group/Fox News foxal matter package, and then to a variety of fully tribalized social media platforms, before finally dipping into a level of cognitive oblivion not seen since the last season of ABC’s Lost. I know this is true, because I’ve been covering the play-by-play since Cronkite, or at least while he was still Cronkiting. But republicans lost their minds a long time ago, in a primary far, far away, and the liberal response to this dire and mounting threat from the prolife-letariat is disorganized, off message, and about as potent as a sea sponge fart.

Philosopher Owen Flanagan calls American scrutiny, “excessive, sloppy, and permissive” and “we are both too angry for our own good and largely complacent and thoughtless about how we might be and do better.”

Hmmm. A little philosopher’s projection? Whereas I overall agree, I’m always looking for something that pertains to my particular plight, but I seem to be an MMPI personality group unto myself. Amen.

The Hill article then quotes one Mark Linker:

Speaking of the shadow, why did the above quote trigger me so badly? Hmmm. I have been very judgmental—certainly the last syllable—but if we are, as I suspect, beyond the point of no return as a species in areas such as: disparity, environment, economy, and resources, doesn’t that warrant a smidge of judgeyness? Especially since lifting a finger to save ourselves doesn’t seem to be in the budget?

The article implies we are enjoying our outrage, that we’re all programmed to look for a fight. That is simply not the case, at least for me. I started speaking out about our pending demise during the Bush Administration, because of *cough* our pending demise, which, yes, makes me feel a certain kind of way.

“Sometimes a cigar is just a cigar.”

I will not apologize for insisting my country function at a cognitive level above that of a demented tree sloth. I don’t think that’s too much to ask. I have been very loud, very angry, and at times very accurate with my predictions (kidding, consistently accurate). We are here now …a place I predicted we would be, right about ….now. A place I did not want to be.

Here’s the things I don’t understand about the rest of our collective outrage:

Sure, I’m angry. I’m sick of the endless fluid narratives, like did everyone die in the plane crash during the opening of season 1? Sorry, I’m back to Lost …at least there’s a glimmer of hope for those folks.