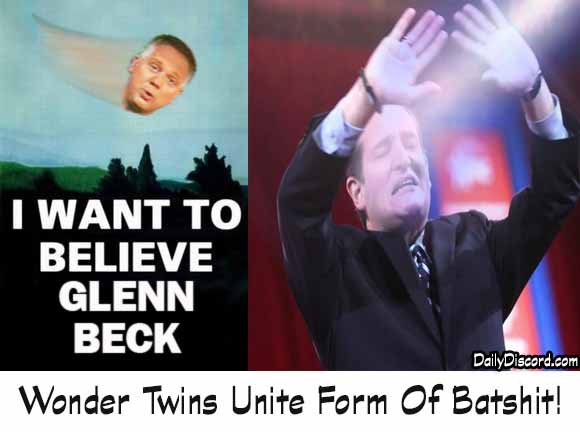 Prior to the Iowa Caucuses, Glenn Beck threw his support behind Ted Cruz and he has been campaigning for him ever since. The Beckster is now willing to fast until his choice for the Republican nomination wins super Tuesday, which Beck dearly hopes comes with cheesy fries. “I will be ready for cheesy fries by then,” explained Mr. Beck, “or some other substance in the chili fry, or poutine family.” If Cruz doesn’t win, Glenn Beck feels the blame should fall squarely on Christians and their inability to choose between a snake oil salesman and a megalomaniacal ass-clown.
Glenn Beck told the press today, “You’ve heard of Denny’s Grand Slam breakfast? …well that’s all I can think about. Did I mention poutine? Look, folks, there is only one clear choice. There are no, I repeat, no megalomaniacal ass-clowns mentioned in the Bible. I read it again yesterday, just to be sure. If America is going to survive the 21st century we need the Ted Commandments, and fast…so I’m fasting. We need to start with Thou Shalt Not Trump!” When asked about his critics, Mr. Beck said, “Since when is it crazy to fast when praying? That’s another example of  how far we’ve fallen from God’s graces. Now, if you will excuse me my priest wants me to complete a regiment of blood letting before he administers the leeches. Sorry, it’s a dandruff thing and leeches are a time honored treatment. Blessed are the gravy fries!”
Glenn Beck critics are claiming the Beck-fast is an ideal opportunity to kill two turds with one stone. “We all know that eventually Glenn Beck is going to run for office,” said DNC chair Nancy Wasserman-Schultz. “And the Republican party is now nuts enough to nominate him. So, if we could just move super Tuesday back a few weeks, he’ll either lose what’s left of his mind from hunger and/or smite Ted Cruz. Problems solved.”
Critics of the plan worry that if Beck loses what’s left of his mind, he’ll become an even more formidable candidate in 2020. The Discord’s own Tony Ballz added, “Besides the song Loser, which is meh at best, what has Beck done for us lately?”