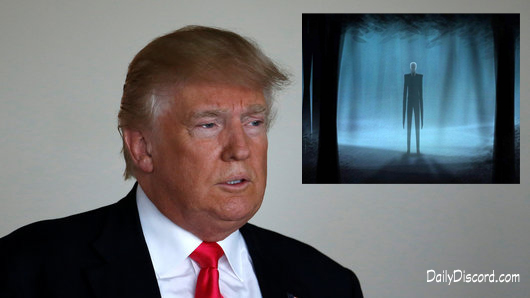 Trump Tower—Presidential nominee Donald Trump is making disturbing claims about the origins of his presidential aspirations. When asked about his initial desire to seek the highest office in the land, Mr. Trump told NBC’s Matt Lauer, “I started playing this game, Slenderman. Little by little I was playing it all the time. I barely had time to file for bankruptcy. Kidding! I have people for that. Eventually the character started talking to me. I mean, really talking to me, like directly into my soul.”

The Trump campaign is backing off this initial claim and released the statement, “It is highly unlikely The Donald even has a soul.”

Mr. Lauer then asked if Mr. Trump was hearing voices and Trump became enraged. “Where are you going with this Lauer! What are you implying? If I know the nuclear codes, he knows the nuclear codes. It’s that simple. He’s inside my head. Don’t you get it? But it’s cool. I think Slenderman is on the up and up. He gets labeled as a bad person, because he’s creepy, evil and inspires kids to murder. It’s a bum rap. It’s a bum rap. He’s not evil. He’s just misunderstood, like me.”

Vladimir Putin is denying claims he is sending messages directly into Mr. Trump’s brain. The Kremlin released a statement to the press today: “It is highly unlikely The Donald even has a brain.”