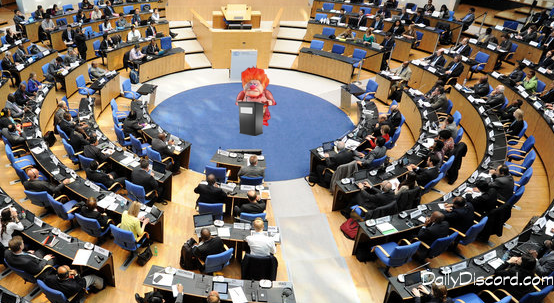 Le Bourget, FR—World leaders reconvened in France today at the request of the Heat Miser. November’s meeting at the same venue was a multinational effort hailed as “the planet’s last, best hope to stave off the impact of climate change before the Force Awakens opens.” After a thorough Palinesque vetting process, The GOP chose The Heat Miser to present the republican counterargument. The controversial marionette demanded an immediate audience with the United Nations, so over 30,000 diplomats and delegates quickly assembled.

As part of his opening remarks, The Heat Miser insisted, “This has nothing to do with the ginormous check I recently received from the Koch Brothers.” During his 17-hour filibuster-style heated rant, The Miser presented a powerpoint presentation designed to repudiate global warming. The slides included an image of a person shivering after getting out of the shower, another person defrosting a very icy freezer, and Senator James Inhofe (R-OK) holding a fully intact snowball on the floor of Congress.

“I think these images speak for themselves,” said The Heat Miser. “The threat of global warming is a hoax, perpetuated by liberal truth-mongers. In fact, I think Al Gore and my brother, The Cold Miser, are having an Minaj El Nino. Ha! Sorry about that. It was my only prepared joke. I know it wasn’t very good.”

The Miser’s little minions then passed out rounds of fireball shots as The Miser continued, “And if sea levels are rising, so what? Beaches are cool, so more beaches would be even cooler, right? And the last time I checked, cooler is not hotter. We always talk about the 97 scientists per 100 who think the world is warming, but what about those three outliers still on our payroll? Who tells their story …well, besides the rightwing media 24/7. Oh, how about that time scientists thought the world was thickening? Remember that? Did the world ever get thicker? Did it?! I don’t know …maybe that was an Onion article.

For his closing statement, The Heat Miser said, “If you go down to any car dealer anywhere in the world, cars still come with heaters and defrost buttons, right? If car manufactures really thought the world was warming, wouldn’t they be the first to skimp on such features? Liberals make me sick. I never thought in a million years I, of all puppets, would despise a group called warmers.”