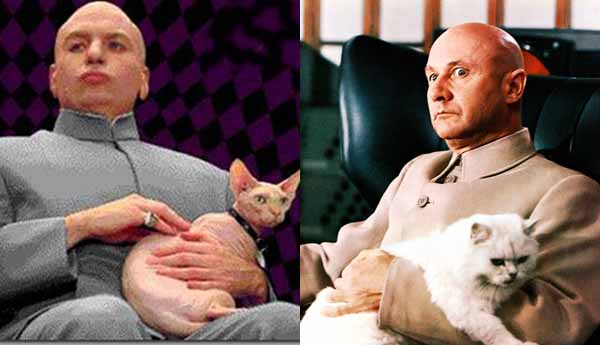 Secret Moon Base—The Evil Villain Injustice League, which also spells evil, has convened on Dr. Evil’s Secret Moon Base to discuss their growing disdain for one Donald Trump. The criminal masterminds in attendance believe Mr. Trump has alienated a group of his staunchest supporters. They are now challenging the Republican nominee to Grab This Pussy. Dr. Evil explains, “It occurred to me after I thought about that old commercial with Robert Conrad. The one where he has a battery on his shoulder and he dares the audience to knock it off. My idea is kind of like that, except with death rays. Trump had our support, but he has sharted all over the same people funding his presidential aspirations. You didn’t really think he funded his whole campaign, did you? He needs to start playing to his base …his evil moon base. He didn’t only look the gift horse in the mouth, he humped the frickin’ thing right in front of us. Like that chair at the debate. Was that chair cleaned or destroyed? The people have a right to know.”

Bond Villain Ernst Blowhard had this to say, “Blofeld! Blofeld! Dr. Evil is correct, we have watched The Donald’s rise to power with a Senator Palpatine-like keen interest. But when he starts threatening the one cuddly thing that all evil geniuses love, he has crossed a line. A fe-line. Get it? Hah! He’s crossed a line, just like he did with that chair at the debate. Was that chair cleaned or…  Oh, sorry.”

Donald Trump is not backing down. He told the press today, “They think they’re big dogs, with their fluffy cats. I’m not going to be intimidated by a bunch of losers. Face it, they all either lost to Austin Powers or Superman or James Bond, even that shitty one, Timothy Dalton. Look, any evil genius on my payroll would win. They’d win. I would employ only the best evil geniuses. If they worked for me, they would have already conquered the world. So hide on your little moon base and plot your little schemes, but if any of you come within ten feet of Trump Tower, remember, I have my own Secret Service, the best. They have already eliminated the Fantastic Four and the X-Men, even the old bald guy in the wheelchair, so don’t screw with me, assholes.”

E.V.I.L is prepared to meet Mr. Trump at a place of his choosing to decide whether or not he can Grab This Pussy. Octopussy was unavailable for comment.