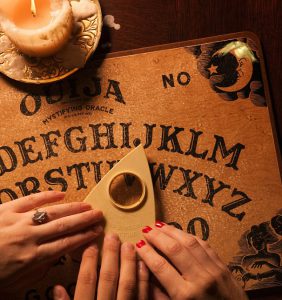 Burlington, VT—Sixteen-year-old Trent Drury admitted earlier today how he and two of his friends are responsible for summoning the current president from the nether realms. The boy told reporters, “Sorry everyone, we really didn’t think it would work. We thought Ouija was just a another game like Monopoly, Clue or that Evil Dead book made from human flesh. We want people to know what really happened, because the electoral college thing just isn’t a plausible explanation.  We are hoping now Mr. Trump can be properly impeached, or at least exorcised.”

All three of the teens admitted to setting up the Ouija board in early June of 2015 and then focusing on, then TV personality and real estate guru, Donald Trump. They reported doing this in an attempt to see if black magic could elevate him to a true position of power. Jay Fredrick explains, “We just played some Ouija. We didn’t sign any documents with any fiery entity, or sacrifice any babies or animals to Satan …this time. We never even considered the possibility this might actually propel Mr. Trump into the White House or we would never have attempted such a thing.”

The third member of the party, Krissy Dalton, added, “The boys are always being boys. I just tag along for a goof sometimes. Last week it was reanimating dead flesh up behind the old cemetery and, yesterday, it was trying to catch the nasty thing. The usual kid stuff. Oh, but I should warn children everywhere not to mess with Kandarian demons, with or without parental supervision. Jay’s mom found that out the hard way. God rest her soul.”