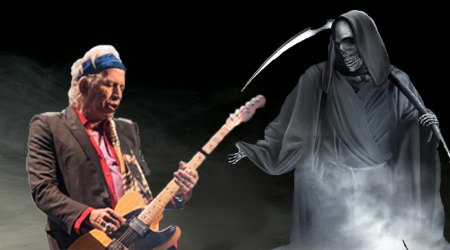 Hollywood, CA—The last surviving members of the Screen Actors Guild are holed up in a an undisclosed location, where they hope to thwart the actions of the Grim Reaper for the remaining days of 2016. Death, who was recently nominated as the Times Person Of The Year, is reportedly “really trying to clench that shit.” In desperation, the film and entertainment industry is striking back, by burrowing. Liberal actors have worked closely with some Bond and Batman villains to create a safe-space, deep in the earth’s crust.”

“It’s definitely open season on Hollywood types,” said actor George Clooney. “We definitely feel like we all have a target on our backs, which would be fine if we worked for Target …but we don’t.”

When asked about the details regarding the death-proofing part of the plan, Patrick Stewart explained, “We used Google and accumulated every item, symbol, spell and potion designed to ward off Mr. Death. There’s a headless chicken nailed to the front door and we all bathed in cow urine. We have priests, rabbis, shamans, and warlocks burning incents, fanning sage, and swinging those little smoking bomb-things about. We wanted Professor Snape to offer a class on the Defense Against The Dark Arts, but 2016 took care of that plan.”

When asked if the stars really hoped to cheat death with these tactics, Stewart said, “Oh, hell no, but the front of the cave is being guarded by Betty White and Keith Richards.”