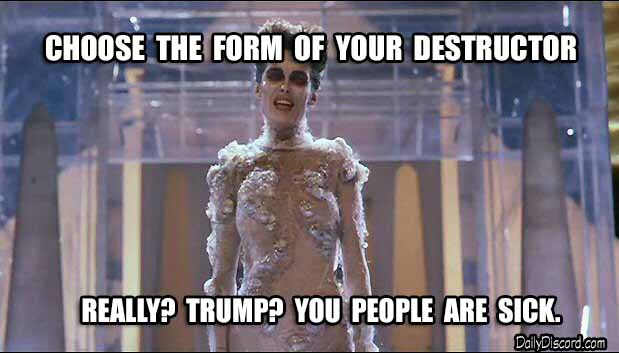 Sumer—The ancient Sumerian god, Gozer the Gozerian, is in the news again today after appearing on a rooftop building in the Big Apple. This malevolent deity known by many names, such as The Traveler, The Destructor and Sonny, is set to destroy the planet on January 20th. Zuul the Gatekeeper, and Vince Clortho, the Key Master, arrived ahead of Gozer in the shape of giant hounds. The Gozerian then asked a representative of mankind, in this case a Republican from Queens, how he would like the world to end. The god was reportedly as “surprised as anyone” that a New Yorker chose the form of Donald Trump for this grim task.

The Gatekeeper then offered some historical context, “During the rectification of the Vuldronaii, The Traveler came as a large and moving Torb. Then, during the third reconciliation of the last of the Meketrex Supplicants, they chose the form of a giant Sloar.” The Gatekeeper went on to explain how The Donald will be shapeshifted into another avenging avatar of Gozer herself on January 20th, 2017, just as Trump is sworn into office.

A man on the street commented, “I don’t know much about these Gozerians, but they can’t be any worse than Republicans. I say ‘do your worst’. We know Trump would.” The Discord’s own Cokie McGrath is in agreement. “Gozer is here to save us from four years of Trump. This is a blessing in disguise—a disguise involving a bad comb-over.” Others across the world are voicing their extreme displeasure. Ben Snobley of Devonshire said, “Sure after Brexiting we kicked our collective future in the cobblers, but that’s our business, isn’t it? But where is our say in this matter? Don’t send some orange-helmeted knob licker to ship me to the Pearlys. If someone’s going to shuffle off my mortal coil, I want a giant naked Valkyrie-like woman with big breasts. Americans *spit*, the words ‘fuck ups’ does not begin to describe.”

Two Canadian men, who did not want their names released, have a message for the Sumerian god, “Take off, you Gozer!”