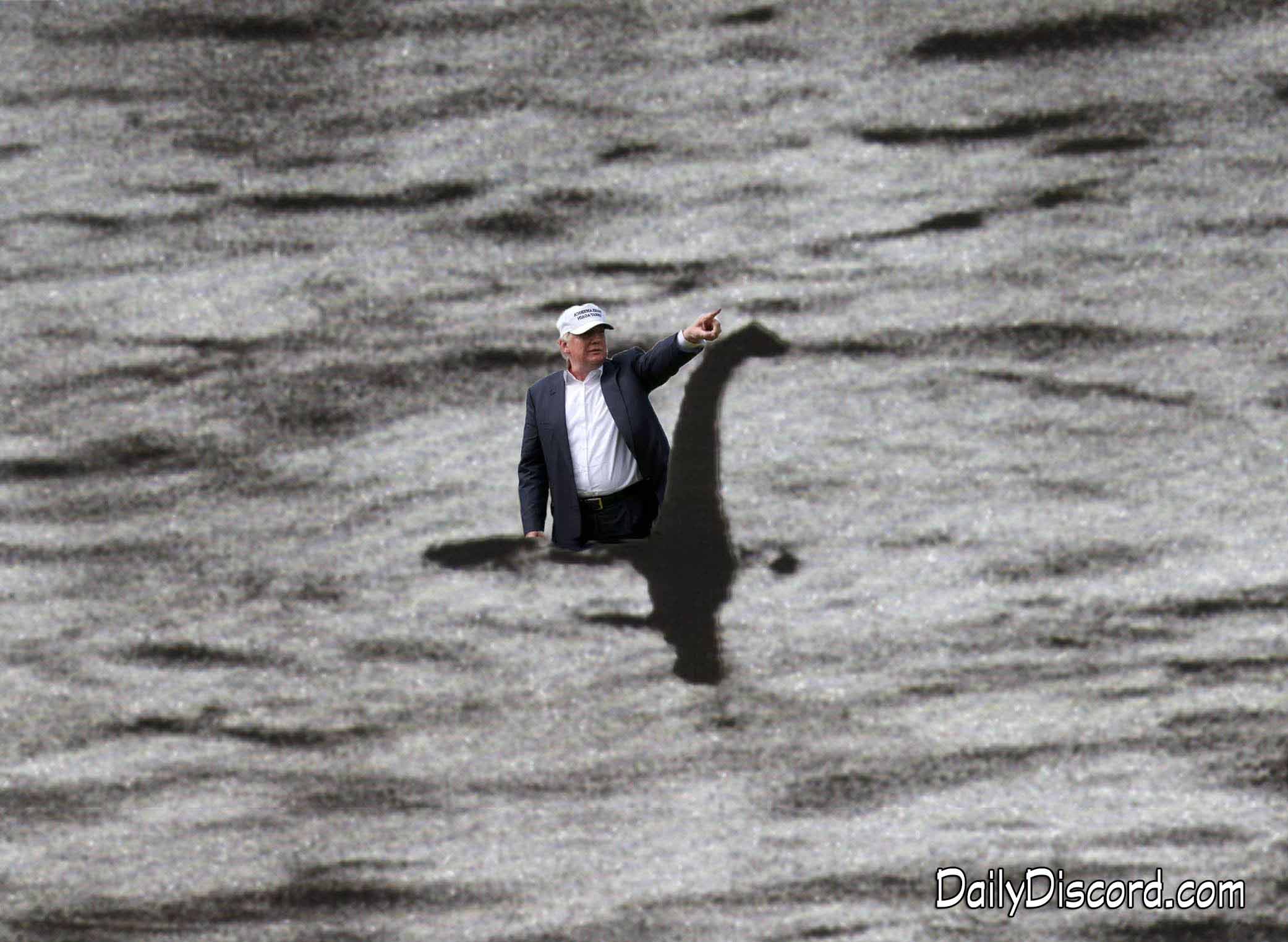 Sorry Republicans, but the DNC was a fairly impressive display. It delivered what the RNC never could, complete sentences. It was a shame how Putin and friends stole the libs mojo right before Act 1. Cossack Thunder? Oh, and I saw my first Hillary bumper sticker the other day! It was on the back of a limo, followed by a fleet of other limos …in Philadelphia …during the convention. Well, at least Hillary is ready for Hillary. One down, 57 million to go! I’d say she has two votes in the bag, but Bill always cheats when you leave him alone for five minutes. Proposition 69? If The GOP continues to get worse at math, maybe she can win the presidency with fewer electoral college votes. We’ll just tell Donald it’s like golf, the lowest score wins. No matter what happens in November, I remain proud of our current President. I know a lot of folks will be glad to see the Obamas go, but eventually you will come to realize how the highest office in the land demands a thoughtful/intelligent person. Kidding, Republicans are to realization as Cthulhu is to mindfulness.
While watching the DNC I couldn’t help but think, there’s more class in Michelle Obama’s pinky toe than the entire Schmuk Dynasty combined. I still feel strongly that there’s a pathway to our demise. It’s the perfect Trumpnado. I don’t care how she is pulling away at the moment. This is far from over. Captain Clooney couldn’t make it up this shit storm in the QE2. Do I think a Trump presidency will actually happen? I admit it’s not likely as this remains Hillary’s election to lose. She is, after all, running against a sociopathic man-child.
Here’s why I still know fear:
1. A likely uptick in terror as the election approaches. ISIS Unveiled?
2. More from this email misstep nightmare. #ReadyForFelony?
3. The possibility of a poorly timed downtick in the economy, which could come in the form of an interest hike. Better off Fed?
4. The DNC’s stunts to protect the Princess from Berning. Debbie Wasserman Schtunts?
5. Putin’s Wiki-move to expose these shenanigans. From Russia with Leaks?
6. Wiki-leaks next October surprise. Julian Assahole?
7. Bernie waited too long to reign in his entitled army. Feel the Slow Bern?
This Slate image sums up my concern for these Bernie Brain Trusts (BBTs): 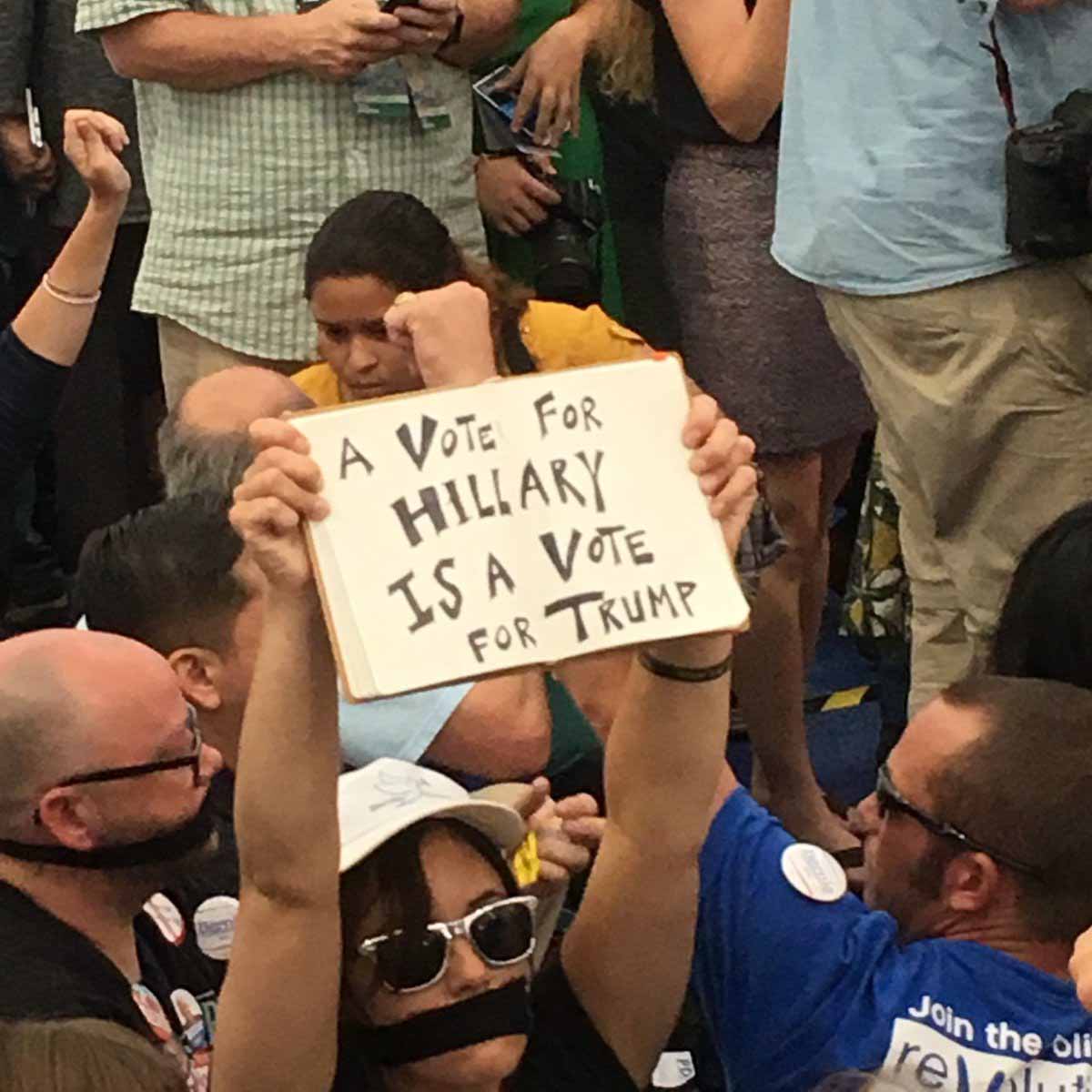 See? This could still go south, so shake, stir, and then find a new country to sip that martini you just made.
All of the fallout from the DNC Wiki-leak thing would be moot had Hillary united the party around a Bernie VP, or at least the damage would have been mitigated with Warren. She chose someone safe and boring because she continues to look past the election. Sometimes Hillary is overly-confident and may well be motivated by a fear of being overshadowed. Underestimate The Donald at your own peril, lady. As horrible a candidate as Trump is, this may not be quite the cake walk you are envisioning. In fact, it could end up her ‘let them eat cake’ moment. On that note, I’ll fire up the old guillotine. I’m sure someone will be considerate enough to spray-paint Benghazi on the side of it. They’d spell it wrong, of course, but it’s the lack of thought that counts.
Our friends around the globe want to see a Hillary Administration and our enemies want to see a Trump Monarchy. Doesn’t that say something? Oh that’s right, the GOP has gone the full Nicholson, as it were. Republicans as a collective are like the end of The Shining meets the end of One Flew Over The Cuckoo’s Nest. They’re all just plopped on a lawn somewhere, lobotomized, frozen, and incoherent.
Irony Alert: The Republicans’ own belief system will keep them on life-support indefinitely, when the plug should have been pulled long ago. It brings new meaning to the term right to die.
Sure ISIS wants a Republican ham-handed approach to the wars in the Middle East. They’re losing territory and recruitment is down. They are looking for some change they can believe in. So why not arrange their own October surprise? That is a very real possibility. Look, ISIS does not represent the sharpest tools in the global shed, but the Republican shed currently has a crescent moon carved into it.
[Change the litter-Fox joke removed by the editor.]
I have desperately been trying to keep my wonderful, yet modest lifestyle, which consists of java and ale with a smattering of political satire. I guarantee this plan will be derailed by a Trump Administration. What many of you may not realize is how this pending disaster is not limited to an El PresiTrumpte. The global economy remains on thin ice, which means any Republican president operating from an alternate reality could easily finish us off. Lest we forget, even the sanity of a Kasich would be at the will of our batshit congress.
But don’t worry Republicans, your determination to blame the other side will never be hindered by the facts. No matter how damning the historical evidence stacks up, you will successfully skirt all the blame via this alternate reality of your own creation. Ted Cruz recently urged conservatives to vote their conscience in November, but how can they do that when this party is devoid of one? Again, as a collective, Republicans are becoming sociopathic and suicidal. A short time ago I endorsed Clinton here on The Discord. It was the hardest political decision I have ever made. After all, I love Bernie and always have. Perhaps the most insightful blogger of our time, Andrew Sullivan, popped out of retirement and during the DNC posted:

“You know, I didn’t cover this primary election but watching some of these Bernie supporters throw various hissy fits, I wonder if I would have found myself backing Clinton. I understand the passion but they sure come off as assholes.”

Never truer words were spoken. Allow me a little self-indulgent smugness. I warned of the collapse of 2009 (six months before it happened). I warned of the consequences of invading Iraq (the day of the invasion). I accurately predicted our ongoing and increased political polarization. I raged at the over reach of the Patriot Act and Citizens United as they were being passed. And, in recent years I have focused on the pending collapse of the GOP. The entire Republican party is, of course, devoid of such prognostic abilities, mainly because their world is limited to talking points, not insights.
Here’s the score card: in 2016: no one gives a flying fuck what a Republican thinks about anything anymore, and rightly so. May your political ideology rot amidst the reddish blonde strands of your nominees, uh, …whatever the hell that’s supposed to be. Oh, and for all those folks comparing Trump to Hitler, enough! Hitler was an intelligent, charismatic speaker with clear goals.