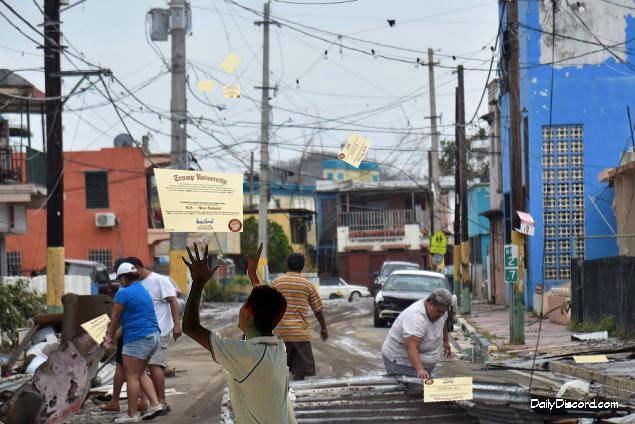 Puerto Rico—After hurricane Maria ravaged the island of Puerto Rico last week, Donald Trump attempted to survey the damage done by the category-4 storm. Unfortunately his HHS Secretary, Tom Price, had already booked Air Force One for a foliage festival in New Hampshire that same weekend. Despite the travel setback, the President remained determined to do “something for the people of Puerto Rico.” Knowing he would not get any kind of a hurricane relief bill through his existing congress, the President resolved to drop tens of thousands of Trump University degrees from helicopters. “They are all just honorary degrees,” said Trump, “but they do afford the recipients all the same honors. Sadly.”

President Trump told the Discord today, “I spoke to the Governor of Puerto Rico this week, well, in tweet form. I told Governor Ricardo Antonio Nambia Nevadas that we will do everything in our power to downplay the fact that they don’t have any power. I reminded him that Puerto Rico is a U.S. Territory, so we get to do stuff to it. And, unfortunately, we will not be taking in refugees from the island of Puerto Ricardo, because they’re brown. They’re very brown. This shouldn’t be a problem, because most of them probably can’t get here anyway. Then I asked Governor Antonio Banderas if he ever considered building a Trump Tower on that island of his. My towers can withstand a category-7 hurricane, because I’m a real blowhard and I live in these things year round without incident.”

Governor Nevares replied to the president’s comments today: “This is a full-blown humanitarian crisis and so far all Mr. Trump has done is add a link for aid for my country to the White House website. But, if you click the link, it goes to an article called ‘Is Climate Change Really A Bad Thing?’ complete with a bunch of advertisements for Ivanka’s latest shoe line.”