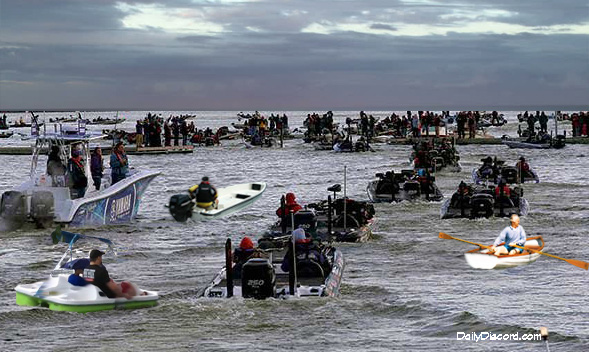 Puerto Rico—Texans responded so well to the aftermath of hurricane Harvey that the White House is dispatching the same gutsy boat owners to deal with the impact of hurricane Maria in Puerto Rico. President Trump told the press today that Houston residents are prepared to make the nearly 2,000 nautical-mile journey to the island of Puerto Rico in an effort to save lives. John Miller of Houston said, “We know this is a longer trip, but we also know we’re the only people up to the task. Granted, we’ll have to go through the Bermuda Triangle to get there, but we’ll all be packing heat. So if any of those aliens try something funny—and you know what I mean—we’ll teach ’em a thing or two about our Second Amendment rights. It might not be aliens, because I listen to Coast to Coast AM, but we’ll also be ready for sea monsters, vortexes, bigfoot, or whatever anomalous phenomenon is occurring in that region of the ocean. We are Texans, so by definition we got this shit.”

President Trump told the Discord today, “Those folks from Houston really know how to respond to such a crisis, and I really don’t. So I thought to myself, why not send those guys to Puerto Rico? Then maybe people will stop giving me shit. Hell, maybe some of them will even make it. I would like to add, we have a military armada heading there in support of these brave men and women, which means its probably heading in the other direction. When I think of Texas, I always say ‘Remember the …remember the, uh, remember that fort we weren’t supposed to forget.”

The head of FEMA, Brock Long, intends to send the buses damaged by Katrina to Puerto Rico as part of Operation Short Bus. Mr. Long told the Discord, “After we get that ‘Bridge to Nowhere’ funded and finished, we can just drive this fleet of barely refurbished buses over there to help those people. Here’s my thinking: water damage won’t matter over water. Huh? Huh? Getting the job done and remaining fiscally conservative.”

The Discord has confirmed that Ralph Kramden and the Simpson’s Otto Man have already signed up for this important endeavor.