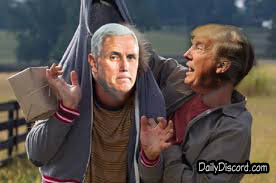 Conservatism and religious faith remain, for now, synonymous with ignorance. Change is an uphill battle when conservatives themselves seem neither able or willing to reform. They truly believe Trump is the liberals’ fault! Where does such a stunning lack of self-reflection leave us? Tell you what, we’ll protect our email servers moving forward, if you promise not to be batshit on every major issue of our time.

Let’s start by validating their fears. The future represents a very difficult path for mankind, but move forward we must. Let’s at least acknowledge, we can no longer consider a business as usual approach. An economy based on rampant consumerism in 2016 is suicidal. Our current capitalistic system needs reformed or scrapped. I would have preferred a sensible shift toward the sustainable, but you people seem insistent on the nuclear option (pardon the Pu 94). Suit yourselves. No really, you should wear a suit when handling plutonium. AM radio active? Trump’s VP pick, Michael Pence, recently gave a nice speech about gutting Obamacare and saving the coal industry. Really? This is a platform? It seems a little more 1916 than 2016. ISIS may be us a thousand years ago, but Republicans are us a century ago. Yet somehow an evangelical nutjob rounds off the ticket nicely.

We need sustainable communities or future generations will …kidding, there won’t be any future generations. This is again where Christian Republicans break from reality as they’re relying on some rapture reservation. Regardless of population growth, limited resources and climate change the Lord will provide…

Thank you for calling the Rapture Hot Line. Your soul is important to us, but we are experiencing high call volume due to the world-ending-thing. For Heaven press 1, for Purgatory press 2. All liberals please remain on the line and a demonic representative will be with you shortly.

[Cut to Muzak version of Belinda Carlisle’s Heaven is a Place on Earth.]

Fellow contributor Pokey McDooris and I attempted a ‘bridging gaps’ approach back in the day, but now we just talk past each other (like everybody else). Each side thinks the other is crazy. I explored the whole, they’re just morons thing, and it’s not that simple. I personally know several incredibly smart peeps who still follow the Fox News narrative like it was the gospels …ironically, some of the same people follow those as well.

Today all Dems are Marxists and all Republicans are Fascists. Whereas that’s not true, we are scrambling toward our corners faster than the Flash on Monster. I do believe the media is at the heart of both sides of this problem. In Dallas this week, President Obama said we’re not as divided as we seem. Uh, …are you familiar with the Facebook thread, Mr. President? It’s not just rightwing media’s fault anymore. MSNBC and our millennial friends are becoming a marriage from hell. They may even one day usurp the kooky crown from our Fox and Frauds. The liberal toxins have risen to the surface. Maddow doesn’t fool me with her guilt-by-omission tactics, but most Bernie supporters? They count delegates as badly as Republicans. Hillary was closer to Obama than Bernie ever was to Hillary. If neither side can count anymore, we’re doomed. Got math?

Meanwhile, the far right’s views remain fairly meaningless. Time and time again the neocons and tea peeps thrust their sabot into the discourse. The answers to our most pressing problems tend to lie between the moderate (old Republican) and the liberal viewpoint. I find little value in the far right position. Republicans as a whole remain searching-for-Pokémon-on-a-freeway misguided. Why would the media try to both divide and misinform so profoundly? Well, I think it comes down to our disparity of wealth. Usually, in such economic realities, we are storming the Bastille (at least historically speaking). As I’ve mentioned before, I believe they’re a distraction to help keep the .02 percent in control of all the wealth, minus any messy revolution. Pokey believes we’re being divided by design as well, but he feels liberals are to blame. This, of course, is as stretch akin to Plastic Man getting caught in a subway door.

Again, no one is smart enough to be wrong every time. If you took a 100 question multiple-choice test, it would be exceedingly rare to get a zero. As for the Grand Old Party, you can’t be this wrong, this consistently, without some serious help. What continues to astound me is the GOP’s ability to screw up, regardless of the amount of evidence at hand. Whether it’s a tough/nuanced issue like Brexit or one that comes equipped with overwhelming evidence, like climate change, the GOP gets it wrong. One study or ten thousand, who cares?! …to the batshit signal!!!

The best example is our overall deficit numbers. Republicans are correct. The overall amount  of debt is too high, but when Obama was crafting a way to change the trajectory of our nation’s debt at the onset of the Great Recession, Republicans wouldn’t look at anything other than 100% austerity measures. Again, they’re incapable of anything but Yes-No, Black-White, Marxism-Fascism, or in this case Austerity-Stimulus. In the end, the state that embraced an austerity-only approach, Kansas, is the only one that never recovered. Coincidence? They’d like you to think so. Nor would our nation have recovered had we listened to these anti-French tricklers.

Essentially they created the recession and then championed the worst approach for a recovery. I said as much in this old article. Minus any relevant counter proposal, Obama went more stimulus-heavy and Republicans skipped town. Obama wasn’t going the full Kansas, because he’s not an idiot. The net effect of Republican antics has successfully shifted the focus away from that huge debt number and it’s one of the only valid points in their no-nothing platform. I wrote another article wherein I broke down most of the pressing issues our time with similar results.

Another example, before we move on.org: 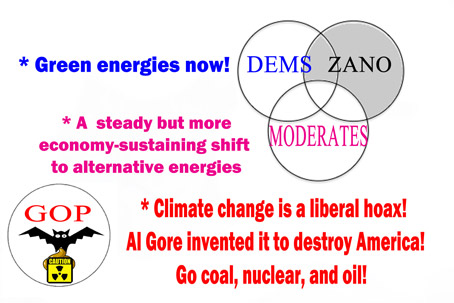 Almost every issue breaks down similarly. The answer always lies between the moderate and the liberal position. The Republican approach is invariably delusional. Is there an exception? Pokey would say abortion. Good for him. How about a second? Certainly not the 2nd Amendment:

Yes, two of the only relevant points these folks have mustered in my adult life time and they still manage to screw them up?! [Winslow: Zano is NOT an adult].

How do you do that when one of these scant valid points is a Constitutional Amendment? If there’s any hope for these folks, they need a credible news outlet and faith-based communities with less fundamental tendencies. I remain doubtful they will do anything except continue to devolve. Make no mistake, a Trump Administration is possible. It’s a perfect storm: an embattled Dem nominee, a rise in terror attacks and now all we need is a well-timed dip in the economy. On a national note, we already blew the whole Black and Blue issue, as predicted. But things will really fall apart when our Christian soldiers start blowing up mosques. That’s when you need to start brushing up on your Farsi, folks. Republicans remain their own worst enemy. That’s when you’ll see the Zexit kick in.

I have always scored the Dems as a political party around a C+, but Republicans, sitting a couple of grade letters lower, seem to have zero peer-review skills. There’s a blind spot in elephantville the size of Texit. Hillary may well receive a 70% Prez-score from yours truly, but she is miles ahead of The Donald’s whopping 3%. Donald’s shortcomings are being overlooked and Hillary’s exaggerated, the usual. Whereas Clinton is an admirable woman with a long distinguished career, who admittedly made a Collin Powell-sized server mistake, Trump makes Charlie Manson seem well-regulated. I know you’re prepared to vote for Trump, Mr. McDooris, which again proves how, when conservatives are presented with two choices, they invariably screw the pooch.

Oh, and the test grades are back and the teacher wants to see you after class, Pokey. Dude? It was a true/false test and the answers were on the board!