Before we get going, sometimes you have to admit when you’re bested. Mr. Winslow, please just add-replace my entire blogging career with these 31 words: 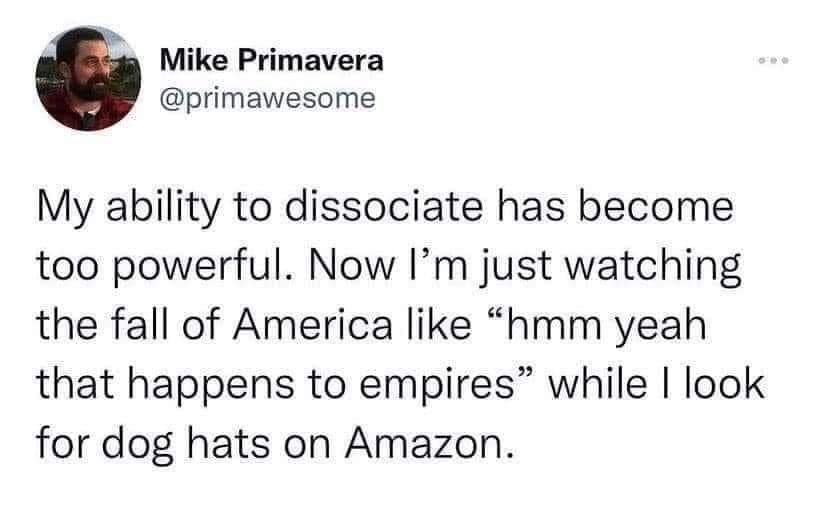 Now my friend and blogvesary is calling the 1/6 committee a ‘show trial.’ He has spent decades focusing on endless ‘wrongdoing’ that turned out to be ‘show trials,’ so I guess he is somewhat of an expert on these matters. He also multitasks by fanning the flames of these show trials, while ignoring those more legitimate hearings, investigations, and court proceedings.

Granted, the outcome of the 1/6 commission remains hazy for this prognosticator, but only because any post-collapse trial is, by definition, a show trial. My friend is correct on this much, but not for the reasons he thinks. Today, our untouchable class is called that for a reason. As a Newsweek piece reminds us (found as I moved to post), justice in this country is more about “who breaks the law in certain zip codes, from certain backgrounds, with certain income brackets.” Same as it ever was. If only we could look into this phenomenon, objectively, through some type of cynical race theory. Hmmm. The worst consequence of Trump skating is not the injustice to Trump himself, a man created in this corporate cesspool called ‘Murica, but that such inaction will further validate his mob of mindless malcontents.

In 2022, the best we can hope to do is publicly shame our oligarchs, so they’re forced to sob all the way to the waiting Learjet. Tragic. Actually, these days they just demand ‘equal time’ to provide an alternate version of events, which, lo and behold, half the country then believes. Presto.

There’s plenty of proof of Trump’s criminality for any with the ability to process information. Please review the obstruction case as laid out in the Mueller report, the details of Trump’s impeachment hearings, and the ongoing findings of the 1/6 committee (which is damning, yet more to come). Yes, half of this D-flavored trial tops 7 Benghazi-style—uh, what’s the word—show trials! Yeah, that’s it. I would also refer you to the outcome of the Manhattan investigation, but it seems a payoff was involved, or something equally disturbing. This is ironic as this investigation delved into a payoff. Is Alanis still writing songs? But will District Attorney, Alvin Bragg, be investigated for this? I doubt it, but certainly someone got to him. After Individual 2 already did his jail time, no one cares about the involvement of Individual 1? Really? You gotta follow the Hannity on this one, folks. No, really, I’ll probably link back to this joke someday.

Fascism is a complicated concept, but the simplest, most agreed upon component is this: some person or group attempts to hold onto power via the subversion of democracy. And the committee has proven, beyond a shadow of a doubt, Trump attempted this. Oh, I can see why they’re all so confused: simplest definition, clearest example, yeah …still too complicated.

What is it going to take for MAGA-types to understand any aspect of our collective reality? It is tough to bother them when they always seem so content in their alternate universe, with their alternate facts, linking endlessly to their alternate news sources. But if you don’t like fact-checkers, how about you at least sanction the grammar variety, eh?

“we would not be where we are now without Donald Trump, and Donald Trump alone. He is unique in American history, a president who told us in advance he would never accept any election result that showed him losing, and then proved it. He tried to overturn the transfer of power to his successor by threats and violence. No president in history has ever done such a thing — betrayed and violated the core of our republic — from Washington’s extraordinary example onwards. The stain of Trump is as unique as it is indelible.”

I never agreed with the ‘Donald-only’ premise. Andrew never really grasped the concept that, not only was the left marching radicalward but so were his cherished republicans. One need only look at the excesses of President Nixon, Reagan, or Cheney to follow this trend line. Sullivan goes on to appeal to the saner aspects of the GOP …that haven’t existed in my adult lifetime (and I’m AARP folks). Here is his plea to that choir invisible:

“You know I’m not a flaming liberal. You know I agree with many of you on the threat from the far left. So hear me out: The party of Lincoln cannot coexist with the cult of Trump. What Trump did to the republic has nothing whatsoever to do with conservatism. It’s the antithesis of conservatism, a revolutionary act to create a constitutional crisis, an assault on tradition, an attack on America itself. You may soon have a chance to run the country again. Don’t throw that away for the sake of a man who cares about nothing but himself.”

Good luck with that, Sully. He does agree that if Trump is still considered for reelection, post the committee findings, then the republican party is “a direct threat to everything America stands for,” but, sorry, there is no evidence that republicans have ever done the right thing, worse still, doing the wrong thing only seems to make them stronger. I love you, sir, but you are smoking crack on this one. The GOP is and has been our biggest threat, even if the puppet master premise, which is clearly possible, is correct. The faction who would support all the evils of the puppet masters must be reformed or eliminated, period.

The evidence in the investigation in 1/6 is overwhelming—apparently too overwhelming for our rightwing friends to process. Meet the Press’s Chuck Todd breaks Trump’s legal jeopardy down into three primary legal liability areas: conspiracy to overturn an election, the incitement of a riot, and the money angle as it surrounds this, or any Trump-related situation. If I had to guess, I would say the committee will finish with a strong and compelling case against the former president, in all three areas, and then hang up that old ‘gone fishing’ sign. Trump will not likely be charged, so, yes, in the end the whole thing is a bit of a dog and Rudy show. Again, this is what a post-democracy looks like, Poke. The Washington Post Post?

Meanwhile, to the backdrop of yet another investigation of a lifetime, my friend, taking his cues from Tucker, is equating the Stephen Colbert stunt as a further indicator of the meaninglessness of this important investigation. Hmmm. This might be the best false equivalency ever. It might win. But fascism is never a joke, Poke, oh wait, it is the way republicans do it. But I do fear the next round from Team Abnormal won’t be as funny. My friend even repeated Trump’s attempt to disperse the protestors as proof of his innocence. Really, dude? He released that statement only after a huge, gaping void of death, mayhem and silence, after about “six hours of paralysis.” Speaking of which, I bet Trump is the only guy that Allstate Mayhem guy avoids.

I haven’t followed this hearing that closely, because I have made peace with the US-end times and prefer to spend my energies elsewhere, but my bet is someone in Trump’s inner circle finally pleaded with him: “If you don’t do something to settle this down, right now, you will be held bigly responsible.” Only then did Trump read someone else’s words. When does the truth come shining down on this lot? When is enough going to be enough? I have studied their actions and inactions for decades, yet I seem no closer to solving this riddle of the sphincters.

Hey, is there still time to make that last line the title, Winslow?