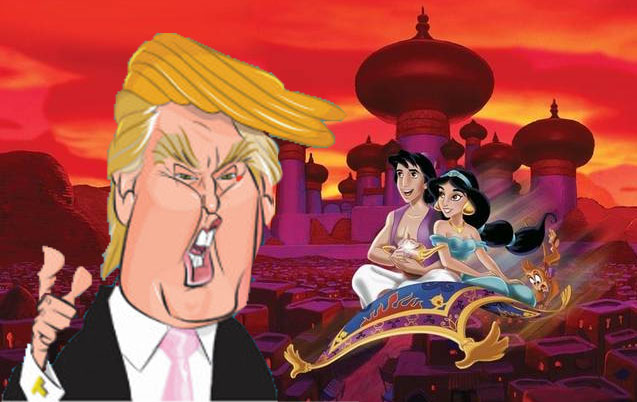 The Trump campaign has released a list of recent “Key Tweet Exchanges” or KTEs. The Donald is already claiming progress on many such Tweetings #WinningUSA! Mr. Trump is claiming Admiral General Aladeen of Wadiya has agreed to lower the price of oil for the U.S., if he can fly Air Force One naked. “That’s a good deal,” said Trump. “I’ll just have some of my Mexicans clean the seats. We’re talking 20 bucks worth of cleaning products for much lower oil prices.”

Borat has yet to confirm this deal, but does admit he received an honorary degree this week from Trump University. Meanwhile, Agrabah has agreed to allow the construction of a Trump Casino right on top of an existing mosque. “That will be nice,” said Trump. “Find God in the lobby and shoot craps upstairs in the casino. It’s win win. Allah Akbar? We’re going to have Allah rock-bar.”

Historically the fictional of city of Agrabah has been poor at complying with such agreements, but The Donald claims this time will be different. “This is different. It’s different. The King of Agrabah knows I will magic-carpet bomb the shit out of him, if he screws with me. He knows this, after all, he’s a cartoon business man, like me.”

The King of Agrabah was unavailable for retweeting. Mr. Trump added, “Oh, and you know that floating island China is building in the South China Sea? Yeah, well they can keep it there, but only on one condition…” 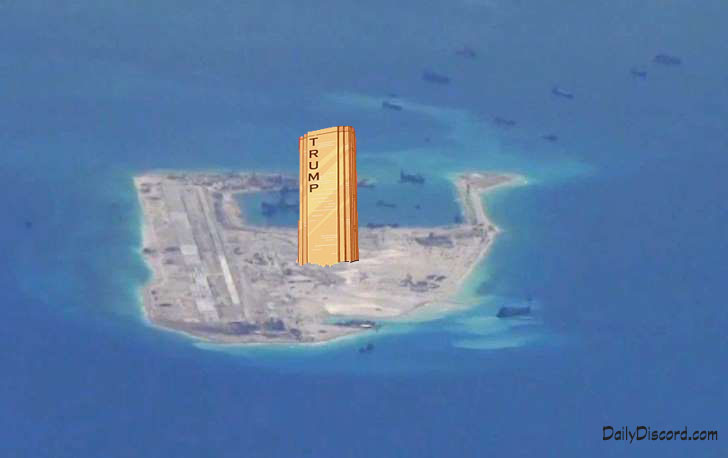