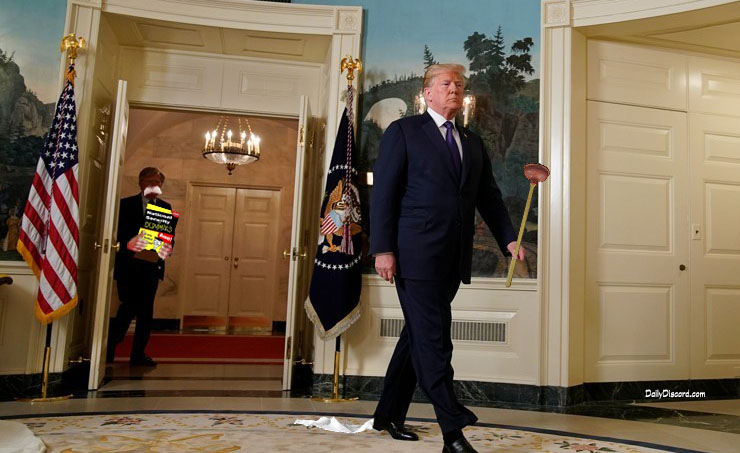 This article is a response to my friend and blogvesary, who keeps clogging my comment threads with War and Peace-sized tidbits of misinformation. Here’s his latest gem:

“If Hillary and DNC are so corrupt as to commit the two electoral crimes (with smoking guns), why do you think the ‘surveillance crimes’ are so far fetched? The FBI could investigate–oh wait, that’s right–high ranking members of the FBI were involved with the alleged surveillance crimes. If the investigators are called upon to investigate themselves, then we really are in uncharted waters. Did you even read the Inspector General report on McCabe?” —Pokey McDooris

I added the word ‘even’ to his last sentence, because it’s implied. There’s no new information since April, so am I missing something? McCabe claims that as Chief Deputy Spook he had the right to leak what he leaked, the Attorney General doesn’t agree… discrepancy, misstatements *Yawn*.

News Flash: The president made a false statement in tweet form in the time it took me to type this last bit.

Somehow this translates to: Russia did not interfere with our election and a dangerously comprised ass-clown is free to run his circus. Hmmm. And to what smoking gun are you referring? What surveillance crimes? For those following the news, there should have been more Trumpies wired. Maybe they ran out of hardware after the fall of Radio Shack? Hey, let’s have a counter counter counter investigation on that…

Why are you choosing today to turn on your Frankenstein’s spookster? Why are you doing this at the very moment our intelligence communities might actually counter November’s electoral brainfart? Your timing is impeccable. Any international call can be monitored, post 9/11, and I remember speaking out about that. Did you? Essentially your ilk ok’d the survelliance of all international calls, unless there’s suspected collusion.

Many on the right are harping on the origins of the surveillance of Trump and Friends. They keep referring to the “salacious & unverified” Dossier. Not sure I understand their ongoing confusion. Here was my response:

“Papadopowhatsas talked some smack, it was reported, he failed the audition, he was eventually wired for the Feds. Then the evidence starts to mount faster than a rabbit with priapism. You keep saying the dossier started it, which is patently false. It likely played a role in the FISA extension, because the Feds realize it’s credible (coming soon). Just now, we find that the Ukraine paid Michael Cohen to meet with Trump. If quid pro quo is found, and that’s NOT a very big if, a full annulment would be in order. You don’t have to know what’s going on, just wait for the shoe to drop, or shoes. Even you can’t miss them. They’re big and red and they squeak when stepped on.”

Whereas my friend always demands I keep abreast of all his rightwing craziness, I keep referring him to my zenwrongness theory. Republicans are always so sure about the latest rage, they forget how none of their shit ever pans out. When he’s proven wrong, again, when will Republicans start to question their dubious news sources and their outrageous leaps in logic?

The AG report cites a breech in protocol, but any larger grand conspiracy has been outsourced to Trump. Here’s the latest from The Atlantic on the WikiLeaks side of the real scandal:

June 2016: Top Trump campaign officials meet with Russians to get dirt on Clinton.

2015: A black woman Is doing her job as Attorney General (labeled “suspicious”).

2015: A tall white spook is doing his job as FBI Director (labeled “suspicious”).

2016: The tall white spook kind of screws up right before the 2016 election & tips it for Ass-Clown.

2016: Instead of thanking him, Ass-Clown fires him.

2018: FBI Deputy Director leaks something he probably shouldn’t have to the press.

Yeah, I don’t know what they’re talking about either. On the lead-up to the election there was plenty of evidence to start watching these fools, and, amen, someone tried to protect the integrity of our election.

Meanwhile, our president just tweeted: “I hereby demand, and will do so officially tomorrow, that the Department of Justice look into whether or not the FBI/DOJ infiltrated or surveilled the Trump Campaign for Political Purposes.” I hereby demand? And his lawyer showed up at the debriefing yesterday about his own investigation. What a  joke. Could you imagine if Obama used such language and insisted his own lawyer be present for…. oh, that’s right, he never had an actual scandal. Sad face. Still, I hereby demand you people wake the F-up and start to take ownership over the YUGE messes you create.

If there are some Deep State shenanigans, the swamp state shenanigans will likely outnumber them ten to one, and the unleashed horrors on mankind will come in at around a 100 to one. This is why the rightwing media is designed to distract. There’s a lot more Republican mischief and damage, so …look a squirrel!! There is a current tsunami of wrongdoing and corruption, so why are Republicans always focused on the ripple? Their conspiracy theories are always slithery and confusing, which is why I still think the reptilian agenda was an inside job.

Some day our friends on the right will be proven right about something, but that will be no excuse for their collective actions and misdeeds. You do realize the strength and scope of our intelligence communities are the result of the unconstitutional efforts of the more fascist wing of our citizenry, right? You do know who that is? Republicans empowered this community over the years and gems like the Patriot Act have only accelerated and increased their scope and reach. If wrongdoing by the intelligence community exists such actions will have been created, fomented and enabled primarily by The GOP. These are your goons, not mine. Most of them are Republican, which in the 21st century is suspect in and of itself. Have your investigation, but if it interferes with the Russia probe, you will be complicit in the next constitutional crisis.