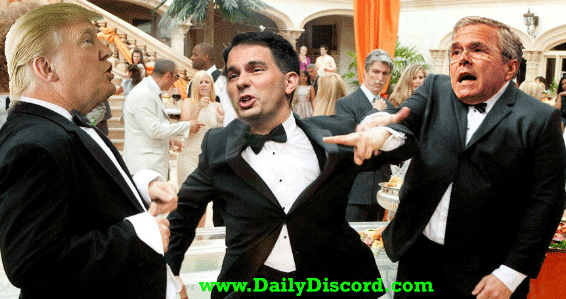 How do republicans remain so oblivious of their own demise? As far as I can figure, they’re so mad at the establishment they plan to suck even more. W’s IQ was among the lowest of any president and Trump is estimated to be even lower, here. I predicted a deterioration, but even I can’t believe how far south of Bush these people have come, the political taint, if you will. Under a republican president we were never going to have healthcare cost containment, we were never going to have an Iran deal, and we were never going to have a recovery in the first place. At minimum we’d be at war with Iran and at maximum our planet would be a radioactive ball of dust. Your candidates belong in a circus, not in the Oval Office. Kidding, circus people are talented.

Amidst our current state of the union, we find 1 in 3 republicans are considering leaving the country, here. When leftists say we’re outta here at least a few actually go. It’s an empty threat on the right. After all, liberals tend to visit other countries. Where would a republican go? Everywhere else is too socialized, or too poor, or too radicalized. Besides, republican knowledge of foreign lands is generally limited to military bases, The Kingdoms of Westeros, or places we frequently bomb. What would a Foxeeter do somewhere outside of the safe confines of their bullshit? Ordering Freedom Fries could be a problem in Frenchland. That’s a country, right? Hey, that would be a great reality show. Place a group of staunch republicans abroad for 30 days. Mistaken and Afraid XL?

We know who these unhappy peeps are. They are the same folks who think: Fox = News, Iraq = 9/11, Palin = VP and Trump & Palin = 2016. All things being equal, I am nonplussed by your mathematical prowess …wait, subtract that.

So you didn’t bug out when W was actually dismantling the Constitution, lying us into war, torturing folks, and creating a global economic crisis? Okay. So it’s with a heavy heart I say, don’t let the Constitution hit you on the ass on the way out.

Meanwhile, our fiscally conservative friends spent an estimated six trillion between Iraq and Afghanistan but, to be fair, some of the problem was cutting taxes during these two extravaganzas—a bold move, if you like depressions and group called ISIS. So spare me the lecture on liberal ignorance when Donald Trump is your lead nominee. Let’s say 9/11 was an inside job and then let’s say President Trump ordered the job. If this were the case, the Twin Towers would still be standing and a ketchup and nachoey smelling crater would be all that remained of Coney Island. I don’t think there’s much under this guy’s comb-over. What a conundrum for those El Chapo thugs. The guy obviously doesn’t have a heart and a head shot would only break his hair.

Your bullshit aside, what are you so angry about, folks? Your neighbor can now marry the person they love? Your friends and family are more likely to be insured? We’ve thus far avoided WWIII? The housing market is too good? The stock market is too high? Gas prices are too low? Oh, the horror! I still think we’re in trouble. When I said we would never recover from Bush, I meant that. No matter what stories you make up in your heads, the republican brand will continue to shit on the Constitution, shit on the middle class, shit on the global economy, and shit on our ecosystem. Actually, wait, shitting on our ecosystem is probably okay, depending on the local agriculture. Freedom Feces?

Not only do I fail to understand your foreign and economic policies, I marvel that you spend most of your time inventing scandals.  I haven’t seen someone make something out of nothing since that Scientology episode on Seinfeld. Wasn’t there one of those? Thus far nothing Hillary Clinton did with those emails or her server was illegal! Her handling of the situation sucked, which is no surprise, but as usual there’s no there, there.

“If Benghazi is the real 9/11 than The Rutles started the British Invasion.”

I’m not going to mention the host of even more delusional scandals, but here’s my cartoon overview, here. It’s really not the Sarah Palins of the world that get me, it’s the fact the republican brain trusts are no better. Drain the reflection pond in DC a few inches and you begin to grasp the depth of today’s Grand Old Party. Sadly, they will continue to shit on the truth like a Sasquatch at a prune fest. The GOP’s collective IQ is dropping faster than a Value Jet in a cloud burst, and the fact they are all so mind-numbingly oblivious to this fact remains the story within the story of our time.