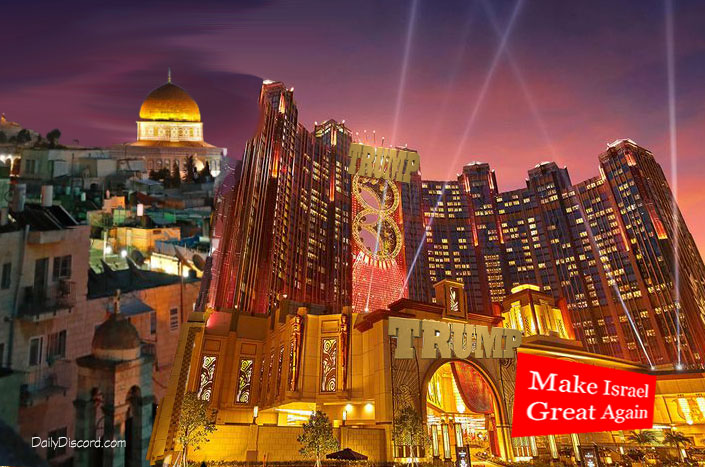 The US Ambassador to Israel, David Friedman, offered a badly Photoshopped representation of what the facility will look like once the massive tarp is removed. The embassy will be opening tomorrow morning, but Trump has not been issued the final casino license due to his ongoing questionable business practices.

Ambassador Friedman told the Discord today, “We are so psyched for the opening ceremony, which will include high-end entertainers. The plaque is being engraved right now in a sweatshop by Bangladeshi children, and the official seal of the United States embassy is being hung over the main bar area as we speak. And all of the hotel sheets were made by those Depends people! This is going to be the grand opening of all grand openings. There is even a rumor Trump shared his famous Mar-a-Lago chocolate cake recipe with Israel. If that doesn’t bring a piece to the Middle East, I don’t know what will. As that headless French woman once said, let them eat his cake!”

President Trump said, “This embassy will rake in more dough than any other embassy on the planet. Smart, the people of Israel are smart. I also want to thank Israel for setting me on a clear path to war with Iran. Hell, I may nuke those bastards via tweet to coincide with this amazing grand opening! #IranSoFarAway.”