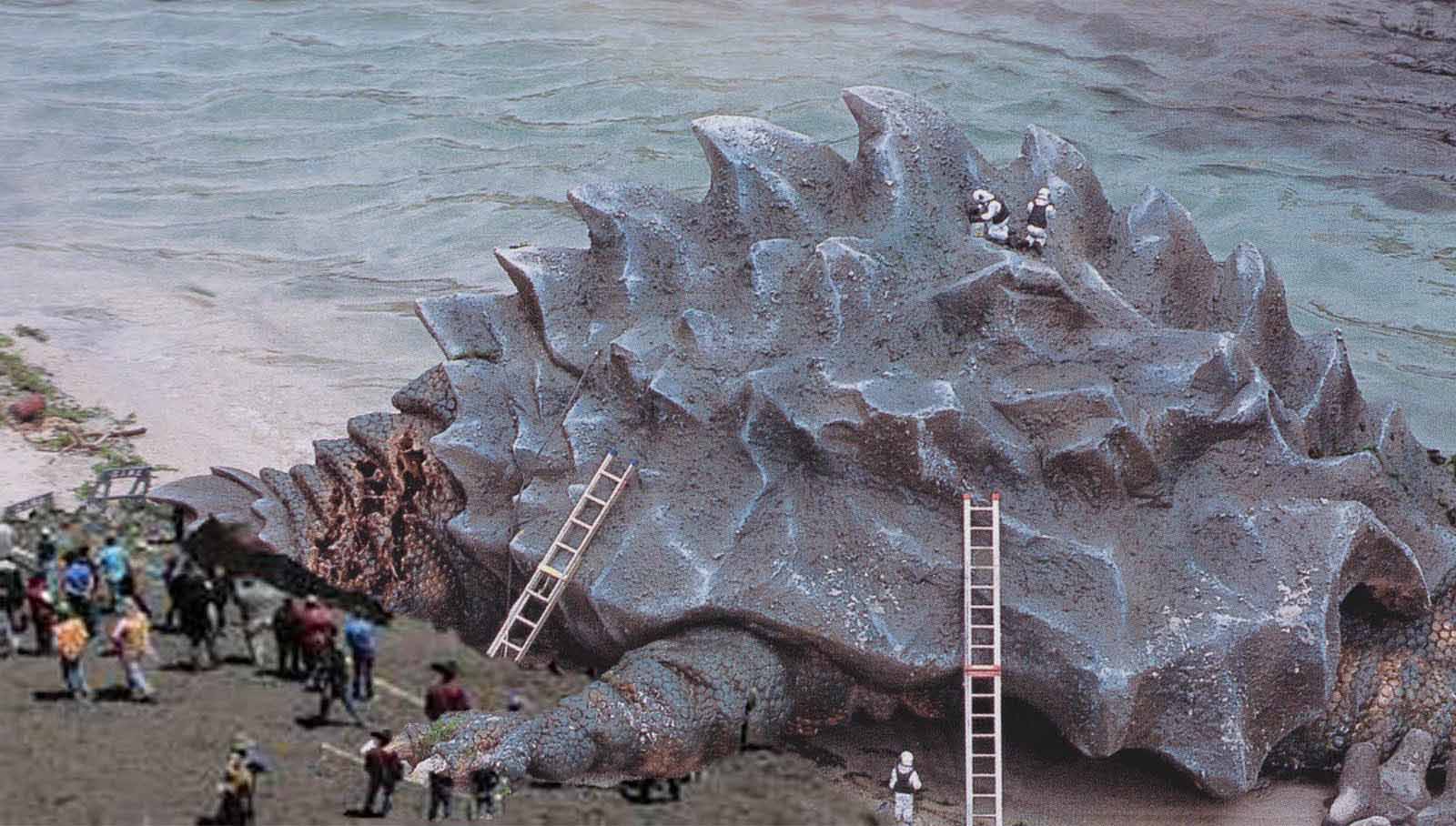 Tokyo, JP—The left wing media remains overly fixated on the deaths of seals, dolphins and polar bears, but what’s going to happen to our giant radioactively-enlarged monsters? With the advent of climate change Polar bears are switching their food source from seals to dolphins, and sharks are already acquiring a taste for human flesh. This begs the question, what’s going to happen when our ocean’s apex predators get a Big Mac attack? What happens when Godzilla runs out of whale kibble? What happens when Gamera runs out of Megaladon and chips? Speaking of which, always offer the malt-vinegar with that order. Gamera totally loses his shit without malt-vinegar! Do you want some toast with that town of yours? Word to the wise, that turtle is not fucking around.

A juvenile Gamera recently washed onto a beach along the coast of Morimotoshop Island. As Dr. Sterling Hogbein explained, “These behemoths are perhaps the most endangered species on Earth. This massive flying turtle typically sustains a breeding population of about 2.5, but, frankly, that last .5 is kind of a teenage mutant. Furthermore, these creatures require approximately 450 tons of fish each sequel. Talk about all-you-can eat sushi!”

When asked about Godzilla, Dr. Hogbein said, “We know Godzilla’s migration patterns have drastically changed in recent years. Instead of his usual picnic lunch in Tokyo, the King of the Lizards–wait, that’s Jim Morrison–the King of the Monsters destroyed Manhattan in 1996 and San Francisco in 2014. As the oceans continue to warm, Godzilla is only going to get crabbier. Hell, he’s still pissed off about having to work with Broderick.”

When asked about Monster-X, Hogbein laughed, “Monster-X can fly between star systems, so he can order his own calamari from Alpha Centauri. No, really, it’s inhabited by squid people. They’re apparently a delicacy. My biggest concern is actually bigfoot. What happens when Sasquatch starts breaking into dispensaries and then gets the munchies? These are highly intelligent creatures who are probably ready to shave off a few IQ points. There’s not a Circle K in the world that can keep these furry bastards satiated.”

When asked about other aquatic dangers, Dr. Hogbein said, “Say, for instance, the Creature from the Black Lagoon gets hungry…he’s not just going to kidnap some bikini-clad dame this time. He’s gonna’ stock up on the old Napa Jack’s BBQ sauce. And are we prepared to see what King Kong will do to Fay Rey during a mass extinction? Remember Pacific Rim job? That’s going to be a tiptoe through the Cloverfields amidst a food shortage for these leviathans. Oh, and don’t get me started on Leviathan. No, really, that son of bitch ate five of my divers last week. I may just let that fucker go tits up–which wouldn’t be so bad if he didn’t have over forty of ‘em.”