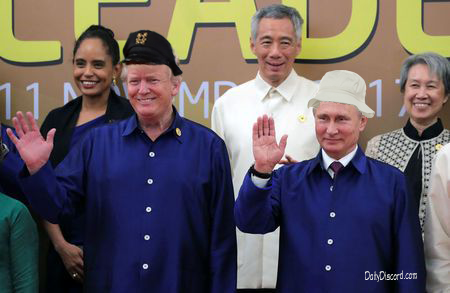 Danang, VT—Although President Vladimir Putin admitted to loving the Ivan the Spy episodes from the old television show Gilligan’s Island, he told the world press today, “As a former member of the KGB, I have never been, nor will I ever be someone’s ‘little buddy’. And I certainly did not call President Trump’s fashion designer to coordinate outfits.” Donald Trump has a similar tale to tell. The president claims he just wanted to wear a Skipper’s hat “as a goof.” Despite the world leader’s statements, Special Prosecutor Robert Mueller is already following the money and has scheduled interviews with millionaire Thurston Howell III as well as an actress implicated in the wardrobe decision, Ginger Grant.

Donald Trump told the press today, “In no way did I, or any of my staff collude with Russian fashion designers. This is more fake news. Now tomorrow’s attire is going to be yuuge, but we are fighting over who will be the front and who will be the hind end of the horse. We’ll figure it out, friends always do. Oh, and Putin said to my face he didn’t meddle in the election. He even did the pinky promise. We have an understanding and the pinky promise is a big deal.”

In another affront to the country of Vietnam, the two apparently closed down a local bar on Friday after demanding it simultaneously adhere to both Moscow and New York business hours, before they tried to have Chinese take-out delivered to the closed establishment.