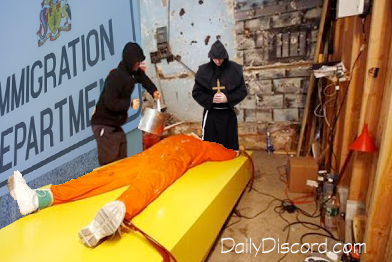 Washington—Congress has advanced a bill encouraging people from war-ravaged parts of the Middle East to: “Stay the F put and make the best of it.” This bill also caps the number of refugees arriving from this region of the world to four. Those four lucky new Americans must agree to be blessed with Holy Water as part of the last phase of a new 37-step immigration process. Democrats are criticizing the bill as being “over the top” and “stupid, even for them.”

“Nonsense,” said Senator John Q. Republican. “This is not over the top, that is a Stallone movie. Look, not only can Holy Water expose and or burn potential Muslim terrorists, it might also keep vampires out of our country indefinitely. It’s win, win!”

Many are calling this process an unnecessary barrier to the normal immigration process. President Obama plans to veto the bill should it reach his desk. “I don’t think our normal immigration service offices are equipped to handle most of the provisions in this bill,” said the President. “For instance, section 11 involves exorcisms. If potential citizens do start to vomit up pea soup, what then? As long as our demonic citizens agree to vote Democratic, I think they are protected under the Constitution.”

Radio anti-personality host, Rush Limbaugh, defended the bill, “I think this is a step in the right direction, but I don’t think it goes far enough. I think we need a waterboarding option. If you really want to be here in this country, you should be willing to go that extra mile—even if that extra mile occurs during a simulated-drowning technique banned by the Geneva Conventions.”

Senator John Q. Republican added, “I agree with Rush on this one as many dangerous entities can still cross our borders unfettered. Oh, and if they sink during the waterboarding session it proves they’re a witch, right? In witch which case, they should be burned alive at the stake…well, after they dry off. I don’t think this bill even addresses instances of shapeshifters or werewolves. Obama continues to be weak on werewolves.”