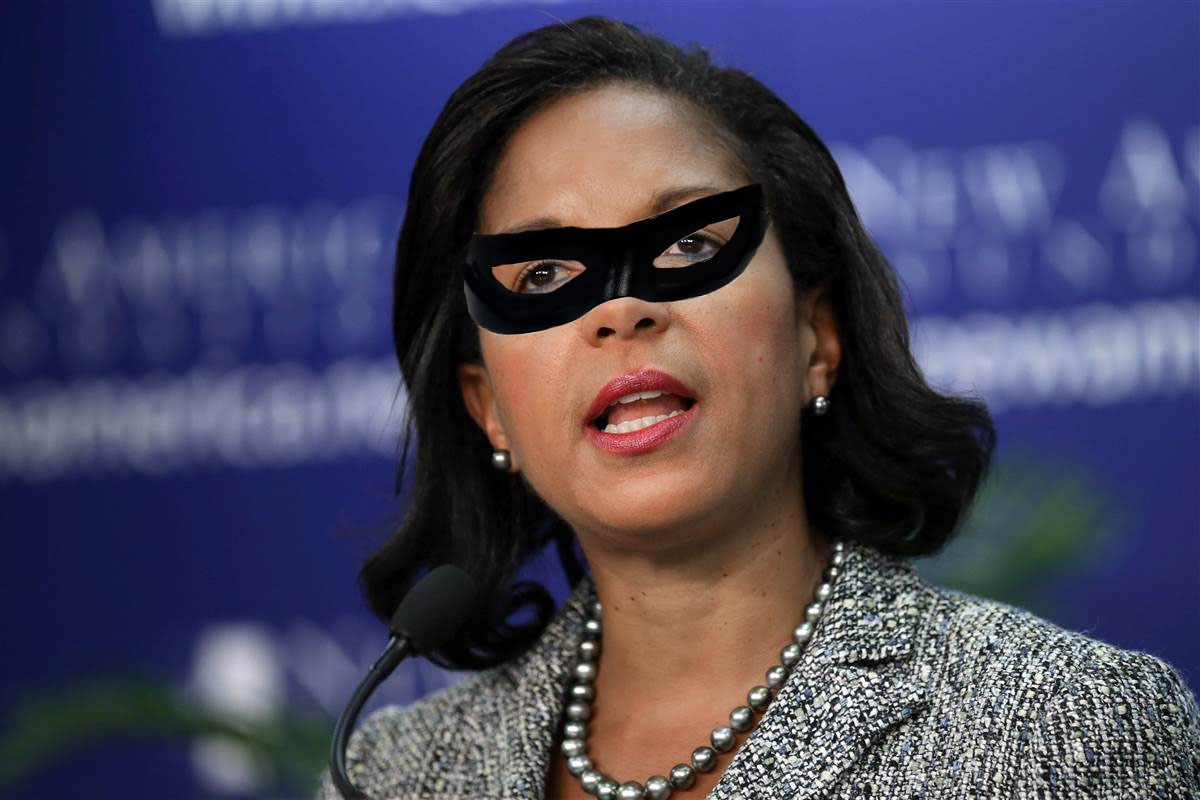 As our Republic drifts ever closer to a full constitutional crisis, leave it to the deplorables to Activate, form of Diversion. In a slew of recent ‘Opening Guanologues’, Sean Hannity has demanded that Congress “put an end to this Mueller witch hunt!” Really, Sir Liesalot? Fast and Incurious? Fox and Frauds are opting out of covering Ass-Clown’s demise and are instead shifting focus to the former Attorney General, Susan Rice (among other things). They would like her to hang for her ‘unmasking’ of some Trump campaigners on the lead-up to the election. You may remember these unmasked Trumpsters as the same people currently perjuring themselves all over the White House carpets—the same people who were and are under an FBI investigation. So the Attorney General’s interest was not only warranted, but required. Full disclosure, I too am under an FBI investigation, but only because of my Nuke Sean Hannity website, which aims to reduce global fissile material, one Fox News anchor at a time.

Here’s what’s going to happen with this next turd of a scandal (hint: the term Benghazi Jr. comes to mind). This will eventually be another rightwing diversion dud (RDD). Trump will leave office against his will, but lest we never forget the four people who died in Benghazi! …because Republicans cut embassy security the year before.

As for the term ‘unmasking’, here’s the Washington Examiner’s definition:

“Unmasking is the term being used in the press about decisions to uncover people who were incidentally caught up in routine surveillance of foreign officials, which reportedly happened to members of President Trump’s transition team.”

Be glad I delegated that, because here’s my definition:

“Unmasking pertains to the DC or Marvel moment wherein a superhero is about to have his or her secret identify blown by someone in the press.”

In the lead-up to the election then Attorney General Susan Rice likely unmasked a bunch of the Trump swamp because, if she ignored their bizarre antics with Russia it would constitute a dereliction of duty.

This may be tough for Republicans to digest, but Susan Rice’s actions will be found to be legal. Fox and Frauds want to fix ‘unmasking’, which is hysterical because they paved the way for this schitznik in the first place. Always remember this easy rule: our nation’s problems are all Republican in nature.

In the year of our Lord Reagan (1981), the Gipper created Executive Order 12333, which essentially allowed the NSA to eavesdrop on any calls from the U.S. to foreign entities, minus the obtaining of any pesky warrants. This gave intelligence agencies the conversations, but protected the names of the individuals unless there was a reason to unmask (reveal the name).

George W. Bush amended EO 12333 twice in the wake of 9/11 to give more authority and leeway to the Director of Intelligence on these matters. He also passed the infamous Patriot Act, which further “reduced checks and balances on those powers like judicial oversight, public accountability, and the ability to challenge government searches in court.” The ACLU’s full list of patriotic atrocities as they relate to the NSA, here. Obama expanded EO 12333 only once, but it was significant in that it allowed this trove of warrantless information to be shared across our intelligence agencies. This greatly increased access to this information for a variety of peeps.

Will Executive Order 12333 be tougher to undo than Provision 215 of the Patriot Act?

Yes, and neither are likely to budge. The Chair of the Senate Intelligence Committee, Senator Dianne Feinstein, had this to say about EO 12333: “I don’t think privacy protections are built into it. It’s an executive policy. The executive branch controls intelligence in the country.”

No warrant or court approval is required, and such collecting never needs be reported to Congress. The Attorney General can “unmask” anyone he or she sees fit, and the rationale behind the process of unmasking is murky. So although some Obama peeps’ actions may prove politically motivated, unsettling, or even disturbing, they are not illegal. More likely it’s none of these things, What we will come to discover as this scandal unfolds is how Trump people should be scrutinized, because they are shady MFers. Essentially the order leaves the handling of this data up to the discretion of the Intelligence Agencies and the Attorney General, thanks to: One part Reagan, three parts W. and one part Obama. I don’t want to minimize the Obama piece, it was integral to this narrative.

Mick Zano = Against the Patriot Act the day it was brought to a vote.

Republicans = Against liberals using it years later due to some embarrassing Republican disclosures.

Insight: you people don’t have any.

Congress should rollback provisions of both the Patriot Act’s Section 215, and Trump should limit EO 12333. This will not happen, of course, because Republicans are in charge. Republicans are to the right thing as Hannibal Lechter is to veganism. Again, the trick is never making this shit like legal in the first place. And who typically makes these overreaches legal? Yep. Same as it ever was…

If something is rotten, it’s either all or mostly USDA prime-choice Republicana. You can put that in your pipe and smoke it, well, unless our Attorney General is around.

Meanwhile, the president will not fair as well with Mr. Mueller’s activities. In the Trumpster’s defense, special prosecutors historically tend to turn up unrelated wrongdoing. See: Whitewater = Lewinsky, Benghazi = email server, and my own 3rd grade “library incident”. Why did you talk to the librarian in the first place Mrs. Macaluso?! Amy Phillips said the incident happened in the gym! The gym! Two words: mission creep.

Even the Clintons got their asses handed to them by a special prosecutor, and our current president is way more shady and not remotely as savvy. So let me be the first to say bu-bye, and good luck in your future endeavors. Don’t let the law hit your on the ass on the way out. If the facts do turn on Susan Rice in this matter, and she is unmasked, for the community’s protections the Agents of S.H.I.E.L.D will transport her to the Vault for proper inhuman containment.