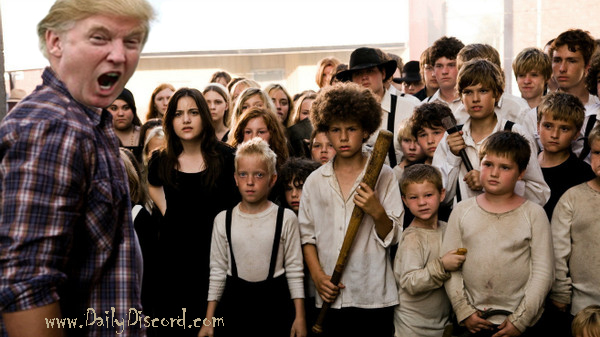 Halloween 2015 finds Donald Trump spooked and crashing back to Earth like Wild E. Coyote meets Icarus meets a certain David Bowie movie. Polls show Ben Carson topping Trump as much as 14% in the state that holds the first key challenge. The Donald is hoping to change his fortunes there, but as he tours through the heartland many of the locals are demanding he, “Go back to Las Altantic, you moran!” and, “We’re voting for the neurosturgeon, dummy!” These are typically accompanied by other encouraging shouts for Ben Carson, in the form of racial slurs. Most of these tend to take the form of Blazing Saddles quote variations, such as: “The new sheriff is a neurosturgeon” and “Lookee here, boys, where all the white voters at?”  It typically gets worse after happy hour.

Many locals refer to Trump as a Riino: Republican In Iowa Only. Many in Iowa are also turning on Marco Rubio, who they refer to as a Rubio: Man Acting Republican But Really From Canada. The Governor of Iowa, Terry Branstad, apologized for this faulty meme, “I think they meant Cuba. They must have confused Rubio with Cruz but, in all fairness, there’s a lot of friggin’ candidates this year. We Iowininans struggle both with how to refer to ourselves as well as the dreaded acronym. But we’re working on a great one for Huckabee. I hope he makes it here, because it’s going to be a doozy!”

Meanwhile, those few Trump supporters wandering around Iowa are finding themselves in mortal danger. “Remember Children of the Corn?” said Governor Brandmuffin. “It sucked, but there’s this old Twilight Zone episode that, uh, okay it’s really just about a bunch a hicks draggin’ Trump supporters into the fields.” 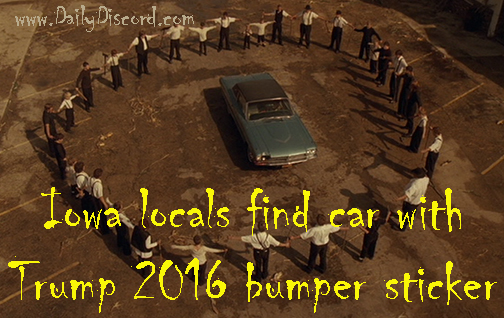 “You’ve got to remember that these are just simple farmers. These are people of the land. The common clay of the Mid West. You know… morons.”

*Disclaimer: we’re not making fun of all Iowians, just the republican ones. Bob, Marjean and Leah are excluded from this rant, but watch your asses, children of the corny.