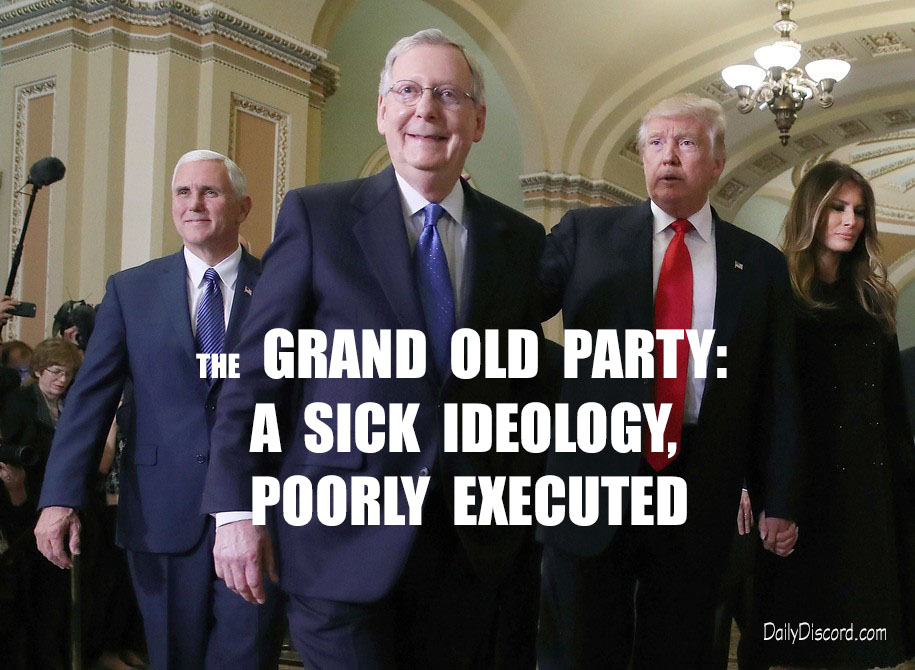 Why do liberals hate America? Maybe they just hate the stupid parts, which tend to be Republican in nature. At least North Korea didn’t vote for their own sociopathic man-child. Patriotism isn’t dead, it’s just brain dead. Z-exiting wouldn’t be easy, of course, but part of me wants to pull the old Daltrey and “put out the fire, and don’t look past my shoulder.” How do you outrun WWIII or the next global economic recession? We can’t escape from ourselves. Conservatives will continue to be the next unnecessary war/global recession people. Trumpcare currently has a 17% approval rating, so when is the Republican party itself going to be as unpopular as its deeds? Those will be the dystopic days worth living for. Why am I ready to give up on the greatest democratic experiment in human history? If America was a bar, this would the part when the lights blare on and you’re forced to acknowledge your poor choices. So… I didn’t miss my shoes and, hey, weren’t you on the faces of meth?

To celebrate the 4th, Obama issued a warning about adopting an aggressive kind of nationalism:

“If we don’t stand up for tolerance and moderation and respect for others, if we begin to doubt ourselves and all that we have accomplished, then much of the progress that we have made will not continue.”

Nationalism can be done minus any contempt of other nations. The timing of Obama’s speech triggered the expected consternation from the ‘Murican Lesion:

“How dare you question our blind patriotism! I lost three sons in the Canadian Bacon Wars! Trudeau dat.”

Fine, I added the ‘Trudeau dat’ part, because they’re not witty enough to make plays on words. Obama is actually downplaying this shit. We are more than just at risk of losing what we have gained. Such slides in our founding principles occur under Democratic leadership as well, but under Republicans they are a forgone conclusion (operative word: gone). Our demise is always on the fast track under Republican “leadership”.

Right now in Flint the children are being killed while the lawyers are making a killing. Is that really okay with people? This is money that could be used for new pipes …for instance, my skull bong is broken. And what Trump is doing to the EPA and related regulations will only expand the Flint magic to other communities. Spread the love and normalize the gutting of basic services. Let’s not forget how more and more brain-eating amoebas are appearing in our Louisiana tap water. It’s win-win for the right as the more brain eating critters out there, the more their policies make sense. But don’t leave without trying the Dumbalaya!

Trump raises so many questions, like: when is it too late for mankind? Is eco-terrorism justifiable at some point? or If we train brain-eating amoebas to target Republicans will they starve? It’s criminal to undermine green energy. Saving the coal industry in 2017 is probably the dumbest move in a thousand years, well, second only to that Sopranos’ finale. Climate change aside, you can’t really think coal is the next economic boom, can you? Silicosis Valley?

Can’t wait! I feel like a kid at Christmas …at a homeless shelter. We’ve been through this shit already, several times. We cut entitlements and regulations and the economic growth is “supposed” to offset the tax cuts. Only problem? It never happens. Lord Reagan started this shit and managed to create the largest peace-time deficits in our nation’s history. It wasn’t totally peace time as he had an illegal proxy war going on the side. Good to have hobbies. And, yes, this was their best president in 50 years. Think about that …they can’t. These tax cuts for the rich mark round three of, how ’bout them gullible square states?!

The Destabilization of the Middle East:

Please don’t forget, behind the Bush Doctrine was the desire to topple the regimes of Iraq, Iran, Afghanistan, Libya, Syria, Somalia and Yemen. We’re well on our way to accomplishing this lofty goal and, uh, why did we do this? Obama played his part as the dominos fell, but what set everything into motion was the misguided invasion of Iraq followed by the Arab Spring. Now what, Incurious George? Please enlighten us, Mr. Deciderer. Get him on a talk show …well, when he learns to talk.

Two words, single payer. Socialized medicine has about a 90% approval rating across the globe. Trumpcare is holding at a whopping 17%. I know you folks aren’t big on statistics, but there’s a bigger spread here than the buffet at the Venetian.

This is a tough subject for me as I have friends and family in our military and our police force, but the more videos surface of assassinations without consequences, the more it galvanizes the us-vs.-them mindset. We can’t have a militarized police force, especially when Republicans are in charge. I can’t breathe, no really, the air is starting to really stink around here.

Look, there’s a lot of legitimate reasons to be frustrated in this country, but a Trump presidency? It’s like fighting Alzheimers with a suicide pact on your 18th birthday. Sure it’s effective, but is it really the answer? Better to wait until you have Alzheimers to form a suicide pact, because you will likely forget to show.

Hint Of The Day: The coal industry should die before we do.

We will eventually bag this inane war-on-drugs mentality, we will shift to green energy, we will eat less red meat, we will return to paper-only in our grocery stores, and we will shift to a single payer healthcare system. Eventually we all grow up, even Republicans. That’s assuming we survive this era of ignorance. How long this takes is up to the American voter, who at the moment has a strong aversion to anything sensible.

You don’t have to understand progressive policies, you just have to kick back and reap the benefits (until your side cuts them). Unless you are a millionaire, there are no benefits to voting Republican, EVER. Trump will gut entitlements while increasing overall deficits and he will also do this while damaging the very fabric of our republic. How do I know this? History is cyclical, or, in the case of Republicans, sicklical.

I’m no Nostradamus, but you folks are—

[Winslow: Nostradumbass joke removed by the editor. I’m firing Zano. Happy 4th! Is it too late to go back to English Rule?]