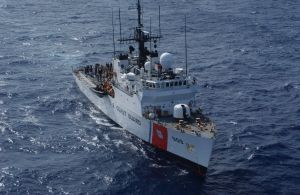 Davey Jones Depot—President Trump’s speech today in Warsaw’s Krasinski Square is now marred with tragedy. The Polish government had already promised the Trump Administration hundreds of adoring fans for his speech, so many are questioning the decision to send more U.S. crowd-stackers. The fleet of buses carrying the Trump rally enhancers are now missing. The president vows to get to the bottom of how his rent-a-crowd bus fleet ended up at the bottom of the Atlantic Ocean. Several of Trump’s cabinet members were vehemently opposed to dispatching these buses. Unfortunately the president is not familiar with many of his cabinet members, or the word vehemently.

In an effort to help cheer on this important diplomatic mission a fleet of buses set out across the Chesapeake on July 5th, bound for Poland. The Coast Guard has now designated all 879 of the missing individuals as “really stupid”.

When President Trump was met with a wave of criticism over his ill-fated decision, he said, “Luckily everyone knows you’re the fake media. Everybody knows it. The real polls tell the truth. There’s been some confusion. Look, it’s simple. These are not robots, they are human applause machines hired to make me seem more popular. And, I am using less than one percent of the country’s annual budget on these ego-stroking activities. We will still have enough funds left to build the wall, well, the latest blueprints call for more of a steep curb. As for the buses lost at sea, Greyhound has these little glitches from time to time. We sent the buses down toward the Chesapeake Bay, each with a map of downtown Warsaw. I don’t know what went wrong? Getting to the bottom of why they got to the bottom of this is my top-bottom priority. Besides, why didn’t any of them have those black boxes? Sad.”