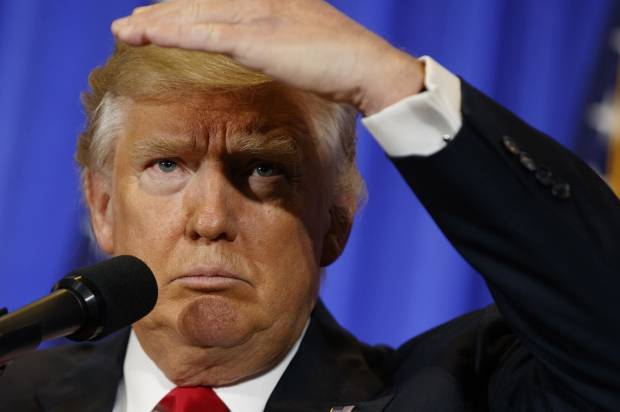 Tweet Tower—During a press conference earlier today, President Ass-Clown Hitler made it very clear that he would consider an executive order to eliminate a journalist who asked particularly pointed questions. When a second reporter questioned the president’s ability to assassinate an American citizen on American soil without due process, Trump responded, “It’s easy enough to make it a two for Tuesday thing, which is tomorrow, so watch your ass! That being the case, there wouldn’t be enough time to get ‘permission’ from the judge, who I paid off already, by the way. So next softball question.”

Kellyanne Conway later told the press, “What Donald Trump was trying to say is how fake journalists are trying to disrupt the executive function and hinder our president’s ability to lead this country. This should be taken very seriously. Mr. Trump is going to deal with all threats like this accordingly, because that’s why the American people elected him, well, that and a lack of education.”

When Conway was questioned specifically on the seriousness of making death threats against journalists, she said, “Under provisions of the Patriot Act, the president has the right to order drone strikes if and when it is deemed a threat to national security. It’s not that he would take such action, but it would be within his executive authority to do so …say, if someone asked a lot of annoying or dumb questions at a press conference.”

Conway later added additional reassurances to her statement. “There is a warning system in place, of course, much like a three strikes rule. All three strikes would need to occur before any military action against a journalist would be executed, I mean considered,” said Conway, “well, with the exception of Chuck Todd, who was a real asshole to me yesterday.”