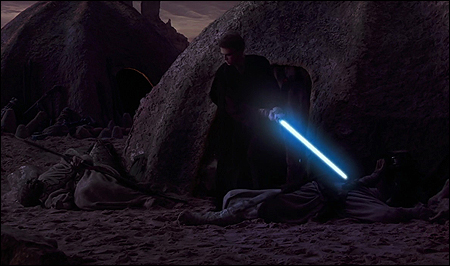 Tweet Tower—President Trump further tested his pardon power today, presumably in preparation for himself and his family, by pardoning disgraced Jedi Knight, Anakin Skywalker. The Jedi High Council found Skywalker guilty of a genocidal rampage that ended the lives of an entire settlement of Sand People on the planet Tatooine in the aftermath of the unfortunate death of his mother.

The Jedi Grand Temple has yet to comment on the pardon and historically tries to remain a-political in such situations. A friend of a Wookie, who knows someone who knows baby Yoda, believes the Council is not happy with the decision and they are concerned Anakin may now go on to join forces with the dark side, full time. There’s also concern he might take command of construction of the Death Star, as posted on Indeed, or perhaps find a job in the insurance industry.

The Galactic Senate has spoken out and is condemning the pardon. They are urging the president to reconsider his decision and are staying in session to approve a project that would build a hyperspatial express route through Earth’s star system, because, and I quote: “The Vogons shouldn’t be allowed to have all the fun.”