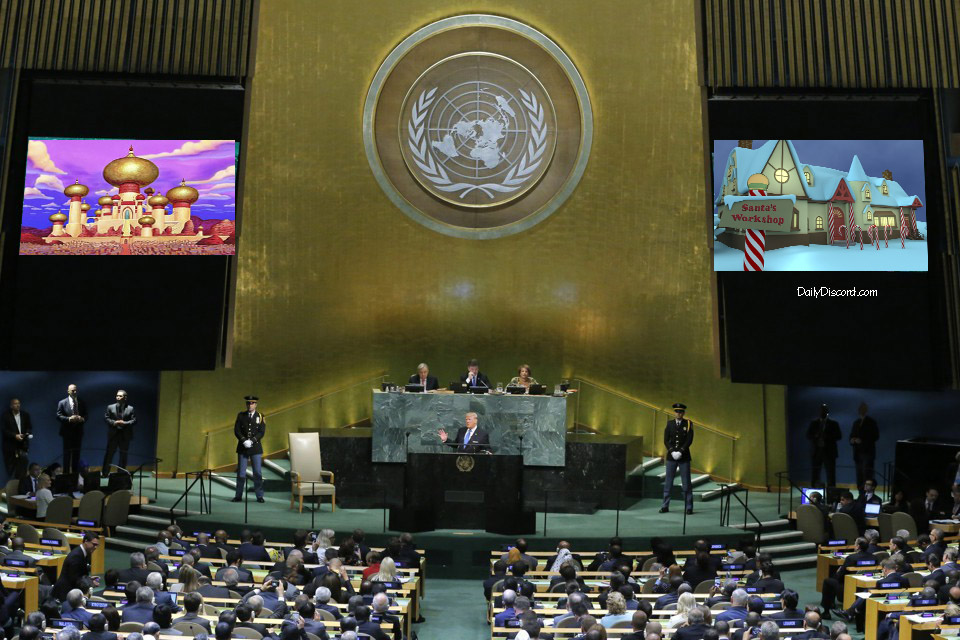 Tweet Tower—Some of President Trump’s more perplexing comments during his UN speech yesterday seem to have taken a darker turn. When asked to elaborate, Trump said, “I have added Agrabah to my no-fly list. No more flying for Agrabah, on planes, or helicopters, or those flying carpets. None of that green energy shit on my watch. And Nambia has proven to be the worst of the worst. These are people who are just asking for me to personally bomb the living shit out of them. We have the best generals working on how to find Nambia on a map and then destroy it. On a related note, I love the movie Nambia, except the scene when Nambia’s mother died. That’s sad.”

Vice President Mike Pence told the Discord today, “Liberals are always striving for Utopia, or Shangri la or Shambhala, which I believe is somewhat south of there. The President feels strongly that if we just nuke the shit out of these places, right now, we can get back to the Republican version of perfection. We conservatives call it Screwtopia, where we can keep screwing people, but they seem to really like it. So it’s a win-win-ouch, kind of thing. Make America Squeal Again! Hey, we might use that in 2020.”

When President Trump was asked about the seemingly random picture of Santa’s Workshop appearing on a giant screen during his speech, Trump said, “Everyone loves Santa Claus, but if that jolly old elf doesn’t come through with a new yacht for me this year, all options are on the table. And don’t try anything funny with that Bumble. NORAD has been tracking that furry fuck since my coronation. You’re watching me, Santa? We’re watching you, MF.”