Cognitive Dissonance Alert: Today we see Trump railing against the Iraq War to the cheers of the people who invaded the place. He courts the Christians when he should be in court himself (not turning over tables like Jesus—unless, of course, the house is losing). He calls Mexicans rapists after penning the brochure, and then he promises to lower tuition rates but only for Trump U students. His entire plan to save the middle class involves tax breaks for his children. No, really, just his children. Ivankanother loophole? I would say your movement is quaint but quaint implies, well:

Your ilk is old-fashioned, but it’s not attractive. In fact, it’s a boil on the ass of civilization. I still support the White Heads Matter movement. Oh, I’m being told their leader is being held on pimple assault charges. We should thank our men in blue for that pinch. I did enjoy some of the history and context in your last post. Well done, sir! Let’s start with where we agree (Hint: this will be shorter than Art Garfunkel’s solo career). I don’t like how either party has handled immigration. Let’s agree on that much, but your perspective remains devoid of even the subatomic precursors of perspective. You believe radical immigrants who sneak across the border will eventually end America? This is your main premise? Most of the folks who perpetrated these handful of attacks, though horrible, were already here. To carry out their heinous acts, they snuck all the way from Queens to a decidedly different part of Queens. I still think screwing up the greater Middle East was a tad worse. Let me explain “a tad”:

1. Tad [tad]: ADVB To a small extent; somewhat:
Or, the name of a particularly douchey fraternity brother. “Pokey looks a tad embarrassed for his inability to assess information and see bigger trends.”

Here’s an analogy that might help: the invasion of Iraq, followed by the Arab Spring, destabilized the region and ultimately sent millions of immigrants traversing the globe. As millions flee certain death, some terrorists may be able to enter western countries amidst this chaos. But we need to focus on keeping nukes away from radicals, period. Will people continue to die in mass shootings? Of course, it’s the American way, but less people are coming over the border in recent years. But don’t fret, Pokey, your gang’s plan to keep harassing Muslims and blowing up mosques will do way more to radicalize those who are already here. See how easy it is to start and then lose a clash of civilizations. Your party’s ignorance is the only chance the terrorists have. They know it, even if you don’t.

This can also be applied to Hillary-gates. Did you ever notice how it’s always about surfacing allegations with you people. Why? Because the stuff you were talking about last week turned out to be bullshit. Your side throws so much at this pantsuit dartboard, we’re heading for a global polyester shortage. Hey, at least she’s saving money on her acupuncture treatments. In effect, this allows that one important piece to slip by unnoticed. The incessant feigned outrage on the right is drowning out anything meaningful.

Fear not right wingers, I’m sure Trump News will reestablish your rightful place in the halls of journalistic integrity.

As for the unconstitutionality of Obamacare, you fail to acknowledge an important reality, Pokey—the reality that at some point this version of it ends for everyone, and there are associated costs. Again, if we had a world where you could truly opt out, with no access to an emergency room, then I would favor your denialistic frontier gibberish plan. That isn’t the way we operate here in the U.S. (we end up operating) so, no, I don’t want to pay for your lack of forethought. For this reason, a conservative think-tank known as the Heritage Group championed a personal responsibility approach and created something called RomneyCare. The rest is history, or it will be if Trump is elected.

Your Supreme Court logic is supremely off the mark. When you mention Roe V. Wade, keep in mind two things: 1. it’s called ‘choice’, 2. I didn’t even know you had a uterus. Yes, those evil Dems are imposing choices again! This cannot stand! More Scalia’s on the bench would actually impose things, in the real sense. It’s important to understand the words you choose in a given sentence.

Impose [imˈpōz]: VERB
force (something unwelcome or unfamiliar) to be accepted or put in place:
“the decision was theirs and was not imposed on them by Scalia-minded miscreants.”

How do Republicans still think they’re the authorities on the Constitution? Your candidate wants to cancel SNL because they made fun of him. He just added Alec Baldwin to his list of people he’ll drone-strike on day one, very constitutionally minded. You think incarceration rates are high now, just wait until Herr Trump hits the scene. Hey, maybe we can be in the freedom cell-block! Obama only ranks a six out of ten for his constitutional prowess. I am not happy with Obama’s treatment of whistle blowers and his less than transparent ways. The genesis of most of Obama’s constitutional problems involve the predictable expansion of all things Patriot Act. This includes drones and the NSA. Obama also went to war in Libya without congressional approval, but he did email me about it first and I told him it was cool. I lay more of the blame on the folks who made this overreach possible and legal. We voted for this shit post 9/11. I remember being opposed to the Patriot Act, but Pokey was a little confused back then. Not much has changed. Comparatively, George W. Bush rates a two on defending the Constitution. He politicized the Justice Department and expanded executive power more than any of his predecessors. He also lied us into war, permanently circumvented the Bill of Rights (particularly Habeas corpus), and in his spare time he collapsed the global economy. In your world, one impromptu act on a tarmac by Bill cognitive-age-decline Clinton will Trump all of this? Really?

Stumbling onto a plane to talk about your grand kids for a few minutes with the wrong person (with witnesses) = dumb.

Hint: he should have done it in secret.

Bush’s bond-villain VP ranks even lower with a -5 score. He had fascist corporate entanglements, tortured some folks, created secret bases and was working on a secret police force near the end of his reign. Meanwhile, a President Trump would likely rate a -10 in this area as he’s not even in office and he’s already chomping at the bit for a police state, here. No easy trick beating Darth Cheney, but he’ll manage. His actions will be more egregious to our constitutional liberties than anyone prior, and he’ll prove even less competent at fighting terror. Let’s not forget Mike My-Great-Grand-Pappy-Hung-Those-Salem-Bitches Pence, who is now being investigated for using the state police to conduct some coordinated voter suppression, here.

And let us not forget that the current Republican controlled legislature is, as we speak, in the middle of an attempt at unconstitutional usurpation of power by refusing to hold hearings on Obama’s nomination for the Supreme Court. They announced this action almost a year before the end of Obama’s term saying that the decision belongs to the American people; the Constitution disagrees.

Hillary would somehow be worse to our Constitution than these guys? This is the part in Cheers when Frasier turns to Cliff and asks: 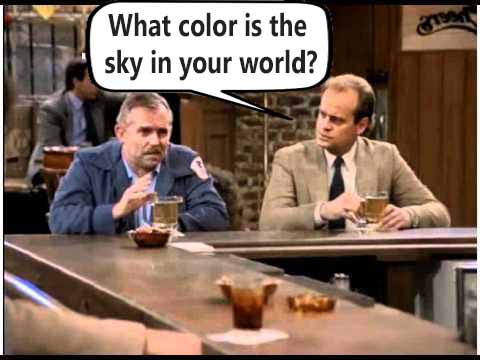 Hillary won’t be great in this area either, but do the math. Oh, sorry, you’re Republican …I meant, react emotionally to any given issue and form a militia. Sorry, but one political party’s ideology is collapsing much faster than the other. If Hillary is linked to inciting riots at Trump rallies that is very significant. Similarly, I am pissed if she hacked Bernie. These are troubling developments, but the rest of her shenanigans are what I have come to expect from the Clinton Machine. In fact, it’s why I’m hiring her to make sure she keeps a certain democracy-ending demagogue out of the Oval Office. Should we clean up Dodge, in general? Sure, but let’s start with the biggest pile of turds in Washington. Hint: rhymes with preservatives.

Part of me wants to see what would happen under a President Trump (the masochistic part). But in this alternate universe, Republicans wouldn’t even acknowledge their part in our demise, regardless of the details. Insight is not in their DNA. Do you really think it’s a coincidence that all of our enemies, Al Qaeda, ISIS, and Russia are all rooting for the same president as you? Do they want to make America great again, too? …or, are you just smoking crack? This Kansas thing is just the beginning. Who predicted the radicalization of Republicans? This guy. Bundy’s activate, form of meatheaded militias. Libs will misbehave too, but they won’t top their Republican counterparts. You see, Republicans are always a little out in front on being a big behind. Here’s something you have gotten right, Poke: the unraveling of our nation’s moral fiber and our dwindling cultural identity. But the solution to the one thing you accurately predicted, is what exactly? Is Mr. Trump really the answer for our nation’s ethical malaise? Oh, right, it’s from the scriptures: Blessed are the pussy grabbers?

As we search for a new American identity, let’s just make sure to leave out Republican values. The GOP reminds me of my old Dodge K car, the lemon of all lemons. I made a deal with Spotsy back in the day that if he towed it out of Penn State, he could have it. But I warned him he was getting the raw end of the deal. Yup… Tell ya’ what, Pokey, you tow your political party out of D.C. and I will help you rebuild the engine. But which bathrooms do transmissions use again?

We will probably Dodge this 2016 bullet, in a way Spotsy failed to, but we may be in real trouble in 2020 (which is also hindsight, but it hasn’t happened yet). Why not get some hindsight as well, Pokey? Just order some perspective, some insight, and some hindsight with a large Coke. It’s cheaper if you get the whole liberal value meal. Dem Taco? In it’s current state we will not survive the next Republican administration, you can bank on that. Wait, I’m being told the banks will close. I know the term bank holiday sounds fun, particularly if you’re a teller planning a trip to Cancun, but this is going to be different. As Monty Python warns, something completely different.