We’ve perseverated on this Libyan tragedy for so long that today, I would like to shift gears and celebrate Benghazi. Not the dead people part, but the ramifications. Your dogged fixation on this unfortunate event has created some wonderful fodder over the years and, like it or not, it’s only acted to solidify Madame President’s chances. This has always been a bitch hunt, but one you were destined to lose. Hillary’s a little more Mentalist to your mental. The GOP is so lost in their own delusions, I knew they would mess this up. Hillary has not only “lost more sleep” on this issue than the lot of you, she’s smarter than the lot of you. She’s a Sherlock to your Inspector Clouseau. The Pink Pantsuit? Now, thanks to this latest farce, Hillary is on a roll and I’m afraid The GOP is pretty much toast.

For a group that claims they aren’t gay, republicans sure like to endlessly probe shitty places. You’re your own worst enemas. Three years! Where does the time go? As previously indicated, I’m not a huge Clinton fan, here, but republicans insist on engaging in self-harming behaviors. I predicted if they didn’t have any real meat, these hearings would eventually backfire. A rock star performance on both the first debate and the 11-hour Benghazi hearing has manifested their worst fears, namely another Clinton Administration. She went from inevitable candidate to vulnerable and then, thanks to you jackasses, back to inevitable. If a Biden/Warren ticket were in play, I’d be pissed!

Watching republicans handle this is like watching a monkey with a gun, left in a room with a bunch of other monkeys conducting a committee hearing. Opposable dumbs? These meaningless investigations have gone on longer than any other show in history, kind of like Jerry Springer. For republicans, any lack of wrongdoing is a red flag, or: 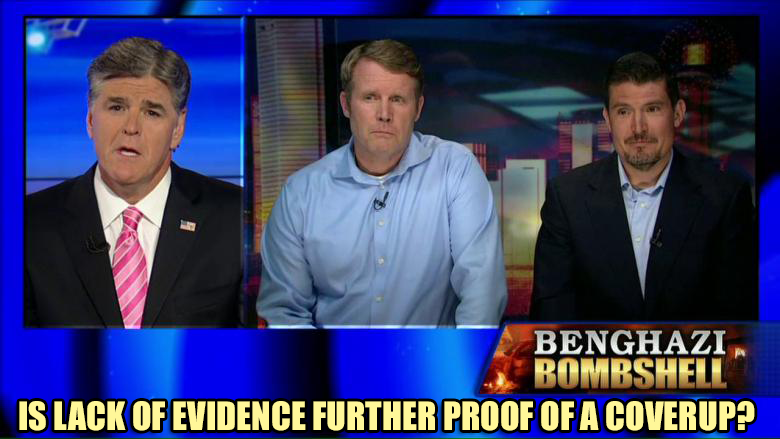 My favorite from the latest round of hearings was when Rep. Mike Pompeo asked, “Why hasn’t anyone been fired?” Easy for you to say, Mister named-after-an-Italian-volcano-that-killed-lots-of-people. So by this “logic”, 13 people must have been fired for the 13 embassy bombings under W’s watch. But wait, there’s more! There were dozens of attacks on the Baghdad embassy. No one knows exactly how many, so let’s say a conservative 33 total attacks under Bush. If each of them warranted 7 investigative committees, like Benghazi, we’re did the 221 committee hearings go? Maybe we need a committee to find all those lost committees. We didn’t have any such investigations and, similarly, there is no evidence Bush fired anyone (by the way, sixty deaths occurred during these embassy attacks bombings). These attacks were wholly sugar-coated under Bush. Embassy Sweets? You want to fire some one? Paul Wolfowitz was the architect of the botched Iraq occupation. Did he get fired? No, in fact, today he’s an adviser for Jeb. Doing things over and over again and expecting different results is the definition of Sean Hannity.

Before you invent the next scandal, you should really consider reading Selective Outrage for Dummies.

Warning: if you Google: George W Bush firing people for embassy attacks, the word ‘fired’ does appear often, but mostly in the context of ‘firing’ rockets and ‘firing’ mortars or ‘fire bombing’ schools.

Well, we did investigate Benghazi for the better part of three years so what have we found?

“This is not a prosecution. I’ve reached no conclusions.”

WTF, Trey?! So let me get this straight, after seven committees, hundreds of interviews, endless books and articles on the subject, and you haven’t reached any conclusions? In comparison, the Scooby Doo Gang raps shit up in about a half an hour. We need some kind of an ending for this travesty, so why not a Scooby Doo one? Rip off Clinton’s mask and discover she’s really the Muslim caretaker, Mr. Abdullah.

Unlike you, I have reached some conclusions. Whatever they’re paying you, Trey, it’s too much. In fact, my first article encapsulated all you need to know on this shit, with the added benefit of jokes. Initially this witch hunt focused on whether the attacks were planned or spontaneous and now we’ve come full circle jerk.

“So the GOP’s next Watergate involves the words extremism vs. terrorism and spontaneously vs. Opportunistically?! I think Obama should step down, right now. His administration obviously has no idea how to use adverbs effectively.”

The investigation went from “false narrative” to “Hillary could have saved those men” to “she smuggled weapons” to “Bigfoot is involved in Benghazi.” Ok, the last one was ours, but we’re back to “false narrative” again. This is odd because several other committees already cleared Clinton of this allegation, here.  So…back to square none? Essentially, all we know is that the State Department had a not-so-amazing response the night of, and that’s about it. A confused and chaotic response falls well short of wrongdoing/scandal/impeachment.

I can’t believe they couldn’t find anything with this kind of an effort. If republicans could have remained focused on the chaos within the State Department the night of the attack, maybe things would have turned out differently. But they just can’t help themselves. They just keep repeating crazy conspiracy theories, because that’s all they know. They will always insist on extrapolating themselves into oblivion. It’s like watching Glenn Beck drag his chalkboard over to the set of Ancient Aliens.

Well…that theory kind of makes sense, comparatively. Thankfully this thing blew up right in time for a Clinton Christmas, thus our first October surprise. These proceedings only acted to expose the vulturistic cretins on the right. I have always honed in on the real story, how out-of-touch one of our political parties has become. It’s a case study on stupid. If you don’t want Hillary in the White House, change your tactics—better yet gain some tact. Oh, and don’t pit a crazy person against her…wait, uh, I’m being told that’s all you’ve got.

“If Benghazi is the real 9/11 than The Rutles started the British Invasion.”