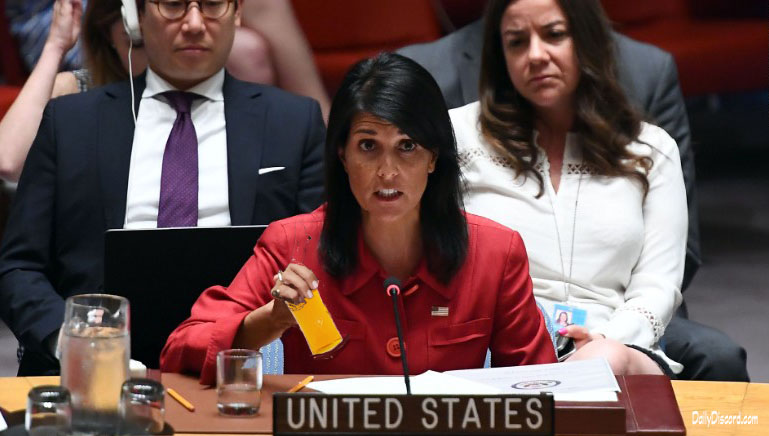 New York, NY—Ambassador Nikki Haley presented a vial of President Trump’s urine in the middle of the United Nations’ General Assembly today as a sign of dominance. “The Trump Administration wants you all to know that America is still the alpha,” said Haley. “We all know the U.S. is number one, so the president is just spreading some of his own number one to each corner of this chamber.” The Ambassador then proceeded to update the list of President Trump’s nicknames for each of the 193 countries in attendance (except Nambia, who was a no-call, no-show).

Many in attendance are calling this Haley’s ‘Colin Powell moment’, but a little grosser. Ambassador Haley defended her actions today. When asked why she didn’t attempt to reign-in the president’s comments, she said, “I did tone it down a notch. Originally it was something like, ‘Get in line everyone, or America is going to make you its bitch.’ And then he wanted me to make spanking sounds. I said, ‘Mr. President, let’s just do the urine thing.’ Oh, and then he said, ‘No, that got me into trouble last time.'”

When asked about a coherent foreign policy, Haley said, “The president just wants to mix it up a bit by stabilizing the North Korea situation and then destabilize the Iran situation.”

President Trump’s new lawyer, Lionel Hutz, has denied there’s any connection between this urine and the urine from the Moscow hotel pee tape.

[Pee to shining pee joke removed by the editor]