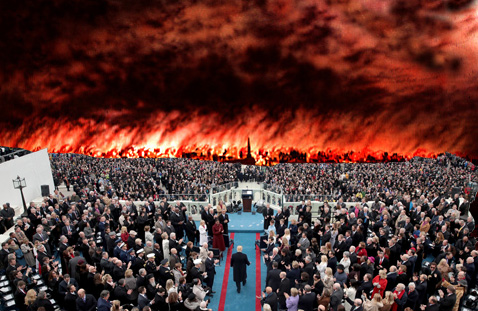 Today’s GOP is defined by a powerful presentism. Its members are locked in a 24-hour news cycle of their own creation, which allows them the freedom to ignore their own shortsightedness. Talk about the elephant in the room. My blogvesary is a freedom guy, who just happens to blindly back a populist-tyrant. How the hell does that happen? How do you ignore our own country’s descent into a rogue state? Hell, Nazism rose as a direct result of the botched Treaty of Versailles, so what’s your excuse, my friend? Did someone try to provide you with healthcare? Awwwe, poor fella’. Republicans are like a Monkee with a gun. Last Train To Auschwitz? Zenwrongness in today’s rightwing politics marks their almost Bodhisattva-like ability to remain fixated on the wrong thing. It’s like meditating backwards, so your mind becomes noisier, more cluttered, and less disciplined. Blindfulness training? Let’s all go into the Rose Garden and focus on the sound of one of Hillary’s emails being deleted.

The Washington Post recently interviewed Peter King (R-NY), who equated negotiating with Trump to a pinball game: “It’s totally not on a straight line. It’s zigzagging, something like a pinball machine. But he does move [the ball] down.” The constant buzzers and flashing lights help our Republican friends move their cynical ball against all rhyme and reason. Trump has perfected my Zenwrongness theory, which is marked by the right-wing’s ability to drown out the truth each news cycle by bombarding it with unverified nonsense. Dharma Kaka? For the best results just add the bully pulpit to the Fox News bullshit, then Reince, Priebus, repeat. Sorry. I will retire that joke …someday.

Likewise, on a personal level, the average Republican voter also holds to an absolute commitment to discuss only the latest point/scandal/affront to the exclusion of all else. Have you noticed? For them it’s defend, defend, defend, defend, defend …and eventually, why are you Drudging up that old stuff? It allows everyone to forget the overall pattern, namely, how each of their points/scandals/affronts made little to no sense. Silent but deadly illuminations from our Cowdung Masters?

Meanwhile, the last of the talent wanders out of the White House while expressing their concern for our nation’s future. The ‘best’ people are apparently bigly concerned. Why listen to what the last of the adults are saying on the way out the door? Oh, that’s right they were forced to sign non-disclosure agreements, ha! Tyranny, what’s your policy? But an exiting Fox News contributor did say this week:

“Today, I feel that Fox News is assaulting our constitutional order and the rule of law, while fostering corrosive and unjustified paranoia among viewers …a mere propaganda machine for a destructive and ethically ruinous administration.”

He’s wrong, of course. Yesterday, when he was a willing part of the lie machine, Trump was still an asshole and Fox’s tactics were the same. The channel has been blundering down the road less retracted for a very long time, but I guess he made his money. Today Fox is simply the authoritarian enabler channel, but welcome, Colonel, better late than never. Reality is lovely this time of year.

Drudge recently conducted a poll suggesting 75% of Republicans think Trump should fire Mueller. This is astounding, even by baseline Republican ignorance. Constitutional crisis? Sure, let’s do this thing! Whereas my blogvesary, Pokey McDooris, calls the FBI’s handling of Russia probe a competing conspiracy theory, I call it a false equivalence. We want to investigate something too! Yeah, I’ll bet you do. Let’s hire a very special counsel.

While Trump was on the campaign trail, the only thing I agreed with him on was his criticism of the Iraq War. So this week he fires General McMaster in favor of John “Let’s-blow-shit-up” Bolton? Wilford Brimley, off his psych meds? Why not? Bolton represents the essence of the Iraq War, with a dash of xenophobia. Can you hear the war drums, Fernando?

“Bolton’s belief in the U.S. power to make the world behave and eat its broccoli reflects what has been called ‘narcissistic policy disorder’ — the belief that whatever happens in the world happens because of something the United States did or did not do. This is a recipe for diplomatic delusions and military overreaching.”

Trump is hiring more people who fit my old diagnosis of the Republican party, here. I don’t honestly believe Trump even realizes what a walking contradiction he is, that would imply some rudimentary level of understanding. The last of your man-child’s keepers are pulling an Elvis. What happens when General Kelly leaves? Hint: Trump gets to break what he wants, unimpeded. Do you even understand the threat? Of course not, you’re a Republican, so by definition you don’t understand anything. The blood of the next unnecessary war is on your hands, my friend, much like the last one. Same as it ever was.