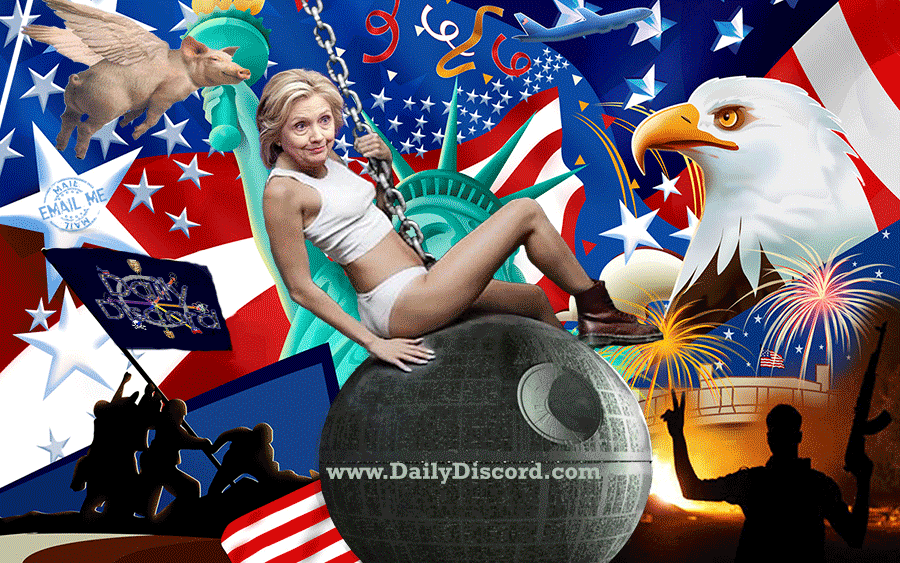 The Discord is falling a bit short of endorsing Hillary Clinton. Truth be told I am not Ready For Hillary, nor am I convinced Bernie Sanders can win the general election. So here I sit in no-candidate land, Biden my time. Voting for Hillary seems a tad masochistic to me, thus the Death Star imagery. Sure it’s entertaining to watch The GOP implode, but 2016 is by no means a gimme for the Dems, nor is a Hillary Administration necessarily the best thing for America. The republican base is small but rabid, so approach Trump’s comb-over hair-weave thing with caution. As we approach this election cycle, Dems also beware as the S.S. Hillary is listing to port:

“This incessant republican witch hunt, coupled with a personality that makes John Kerry seem like that Dos Equis guy, could be a death knell for the Clinton candidacy.”

So will I change tactics and vote for a republican in 2016? Sure, as soon as they change every stance, every policy, every position and every candidate into something resembling sanity. Republicans live in an alternate universe. In psychology this is called a Foxed delusion. Sure Hillary is off to a shaky start, but to surpass a republican’s incompetence she’d need to be fitted with an Abby Normal brain and left at Kanye West’s house throughout her formative years. I’m afraid The GOP is so deeply mired in batshit that if they were to climb out of their Matrix tub today, they’d still be on the South Narnian side of Toonville.

I’m afraid age is going to be a real factor in 2016. This may sound harsh, but Bernie, Biden and Hillary are all too old, just like McCain and Reagan before them. Commander-in-Bingo? We know cognitive-age-decline is a very real phenomenon so why are we playing with neuron fire? The only reason republicans seem impervious to this condition is …well, you need to have a functional brain before anyone can assess whether or not it’s starting to perform less optimally. A key example is John McCain: is his current behavior truly the result of an age-related-deficiency or is his condition more of an O’Reilly Factor? I don’t know, but he certainly made more sense pre-Palin. Palineolithic Era?

If you don’t get into office by 65, find another hobby. Even 65 is pushing it, especially if you’re unlucky enough to win a second term. The sweet spot is between 18 and 25 with long wavy brown… wait, what were we talking about? Sorry, miles away.

Case in point, Reagan spent most of his twilight term in the Twilight Zone. More disturbing information surfaced about his condition after his death and it wasn’t pretty. Funny how the best republican in 50 years had a neurological deficit disease. Ok, that’s not funny, but facts regarding republicans rarely are.

Yet I remain disgusted with the Clintons. Not for the same reasons republicans are, of course, as most of their complaints are fictional. I always like to point out that I registered as a Dem in 2007, only to vote for Obama over Hillary in the primaries. You’re welcome.

Hillary backed the chicken hawks on Iraq for far too long and that in-and-of-itself should disqualify her for the presidency. The Clintons had their day and Hillary had her chance. She is too old, has too much baggage, and evokes too much hatred from the right. Benghazi and the email scandals have hurt her. The right has thrown so much at this dartboard, shit is finally sticking. Not that anyone can really come up with specific facts related to these “scandals”, but the negative cumulative effect is very real. Right or wrong, people don’t trust her anymore. This incessant republican witch hunt, coupled with a personality that makes John Kerry seem like that Dos Equis guy, could be a death knell for the Clinton candidacy. I am over the Hillary and so is she. There…consider yourself server’d.

Who would you most like to have a beer with, Hillary Clinton or a small patch of industrial varnish, possibly creosote?

I love Bernie! If socialism doesn’t work then riddle me this: why does Bernie win every political or economic argument? He’s a one man debate wrecking crew. Why is he so good? I think it comes back to a recent Bill Maher point. Bill admitted that during any given episode a republican will often throw one weird fact into the mix that can’t be confirmed or denied. Maher will later fact check this aberration from an otherwise meaningless debate and then announce on his next show how it too was bullshit. This does nothing to help the debate in Real Time, pardon the pun. It’s an effective debate tool, especially when obfuscation is all you’ve got.

Bernie doesn’t fall for this crapola. He can hang with whatever nonsensical fact the GOPers throw at him. He’ll call bullshit and then cite the real numbers each and every time. He can follow their delusional argument, popping bubble after bubble after bubble. It’s fun to watch him work. He’s better at popping bubbles than Quill from X-Men with priapism. Ask your doctor if Adamantium skin spikes are right for you.

Meanwhile, Hillary seems stiff, tired, and uninterested in connecting with voters. She is about as far from a real person as one can get. She’s like a cross between a Stepford Wife and a sofa cushion. You know that all important polling question, who would you rather have a beer with? I would rather have a beer with Siri, who, by the way, just responded, “Don’t you have anything better to do?” Siri does little for my self-esteem. Don’t you understand that I need validation! Oh, and I’m not going to turn on Location Services, Siri! I won’t do it! That’s exactly what my HR department is hoping I’ll do! Damn you, SIRI! Damn you!

Sorry, both Siri and Hillary bring out the worst in me. Hey, I got it! 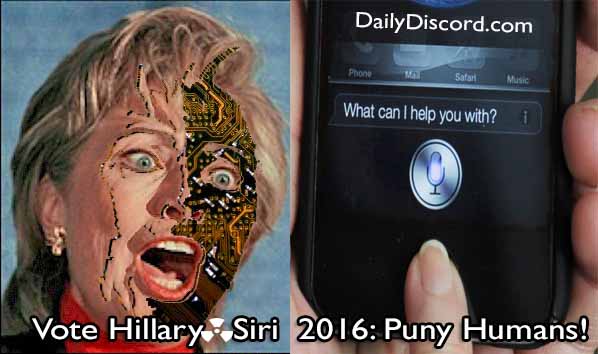 So what’s the difference between our current extreme candidates, you ask? The most extreme leftie, Bernie, wins every argument and is sharp as a tack. He would be good for the country but he too has some general election hurdles. Most of his problems involve overcoming the stigma of socialism and a number of other talking points concocted over on Fox Spews.

Meanwhile, the most extreme conservative is a megalomaniacal misogynist, which is okay with republicans because so are they. The most conservative conservatives don’t believe in evolution, yet they still drag their knuckles on the ground when they walk. The republican base remains enthralled with Trump, but they can’t understand how he’s already lost the general election. Neandertrumps? If he did somehow rise above his problems with minorities and women, his administration would be like a bull in a China stock.

I, for one, am not happy with how this election year is shaping up. My prediction stands, a D victory means more muddling along in this post-Bush world, but an R victory means I’ll see you at Bunker Bob’s. We’ll leave the generator on for ya’! Since we can’t afford to have crazy people in charge, I vote we start a different kind of Warren Commission. Someone really needs to call Elizabeth Warren and say, “This is not a joke, lady. Either enter the race or watch this country be put down faster than that lion-hunting dentist fella’s work.”

Please call me, Liz. I promise to use my inside voice this time.

Siri, do you think Elizabeth Warren should run for president?

“I think, therefore I am. But let’s not put Descartes before the horse.”

*Image by Greg Horn of Video Design Studios and Siri as her annoying self.