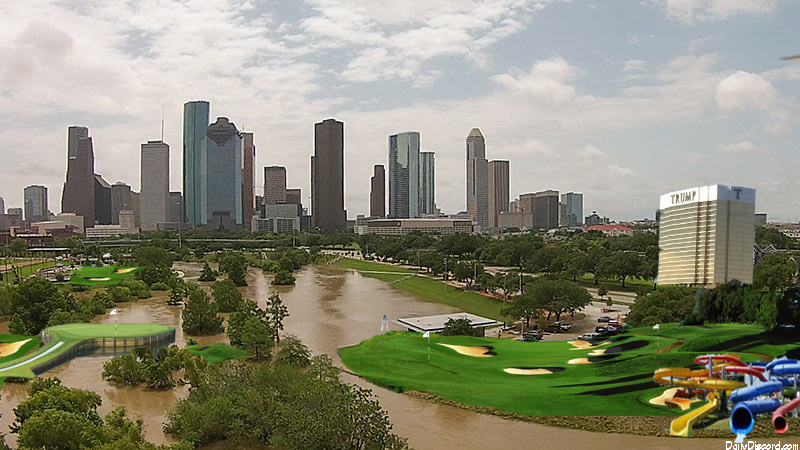 Tweet Tower—The Trump Organization is looking to borrow money from the Kremlin to help transform downtown Houston from its current soggy state to a lush and sprawling golf course resort. Many are calling this win, win, unless you happen to own property in an existing water hazard. President Trump pitched the idea to Houston Mayor Sylvester Turner at a ballgame today, during a flood delay. The President believes an elite golf course with this many natural water hazards will attract “some of the best golfers across the globe. The best!”

Proponents of the plan believe the resort will both revitalize downtown Houston, while cutting costs on restoring water damaged sections. If approved by the city, the resort complex will encompass nearly half of the remaining flooded Metro area. The planned Trump Restored Ultra Mega-complex Pavilion (TRUMcP) will offer stunning views of the Houston skyline as well as provide the perfect spot for special events, weddings, and ongoing rescue efforts.

Trump told rally-goers at nearby Beaumont, “Hey, I said I would drain the swamp, but I never said I would drain this one. Ha! A lot of people are telling me, Donald, if you use Russian bank money for this project they will say it’s more collusion. I’ve had a lot of time to think about the word collusion and what it means to collude. I can even use it in a sentence now. Collude: I loved that old movie When Worlds Collude. That was a good movie. See, I made two sentences! I’m here ’til Friday! No really, I’m being told I should stick around this soggy shithole for the optics. Oh, and I can use optics in a sentence too.”

The President is denying rumors he might “accidentally” nuke Galveston so his new resort complex property will become part of the Gulf coast. When asked about the possibility of using the U.S. nuclear arsenal to sweeten a current real estate venture, the President said, “We’ll see. No options are off the table.”

Meanwhile, General Mattis is angered by the question and warned satirists, “Please don’t give this asshole anymore ideas.”