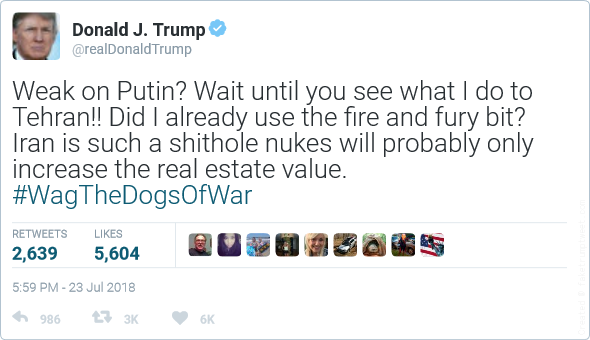 Critics are calling the tweet at best a distraction and at worst a really bad distraction. Senator Chuck Schumer (D-NY) said, “If Donald Trump can’t control his Twitter account maybe he should switch to Instacrap or FainInterest.”

Sarah Huckabee Sanders told the press today, “Based on the fact there are no ALL CAPS in the president’s second tweet, the Defense Department has moved the threat level down to DefTweet 3 #Relax. This is simply the president’s way of blowing off some steam. If this had been an actual emergency ….uh, climb under your desks. Sorry, we haven’t had a threat in a while, so we may end up changing the drill at some point to, uh, go in your closet.”