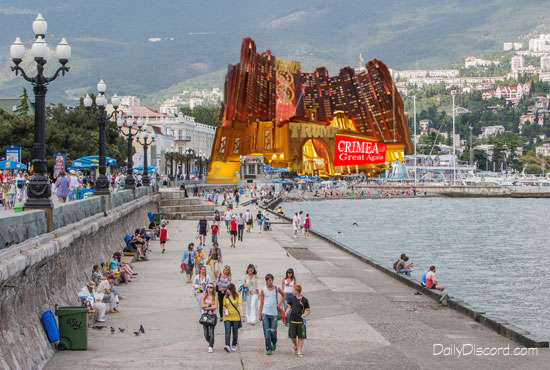 Tweet Tower—The President was all smiles today upon announcing a joint business venture between The Kremlin and Tweet Tower. The president is denying his recent meeting with Vladimir Putin in Helsinki had anything to do with this historic and controversial real estate deal. When asked the president said, “This topic never came up at the summit. We had lots of other deals, I mean things to talk about. I think we just talked about Russian adoptions …and stuff. It’s all in the notes the Russians took.”

The White House is also denying that Trump’s personal attorney, Michael Cohen, was working on the Crimea Casino deal until the day his office was raided by the Feds. The president is maintaining this story despite one of his attorney’s confiscated tapes being labeled Crimea Trump Tower, Baby!

Press secretary Sarah Huckabee Sanders said, “The president has shown how time and time again he puts America first and can separate his duties as commander-in-chief with that of his businesses. Having said that, Trump Tower Crimea is going to be right on the shores of the beautiful Black Sea, complete with private beaches, swimming, fishing, jet ski and boat rentals all with in walking distance of the proposed hotel and casino. There are also time share opportunities. Consider Crimea for your next family vacation or shady business venture. No further questions.”