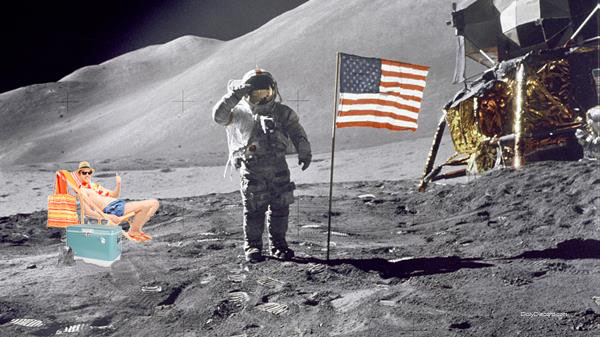 Hollywood, CA—The Stanley Kubrick Foundation, in conjunction with Disney and NASA, finally released the much anticipated moon landing outtake reel. The images were digitally enhanced and reedited to capture some of the funnier moments and hijinks behind the scenes of the mock lunar landing of the Apollo 11 crew on July 20th 1969. The film is being released next week, but some of the details were leaked to The Daily Discord by the Hal 9000, the AI in charge of the Discovery One in 2001: A Space Odyssey.

Some of scenes depict astronauts holding up beers, throwing footballs, and pretending to hump the space props. Ultimately Kubrick was only comfortable releasing the famous Shepard golf shot, but in the outtake reel they tried every sport known to man. After scoring a soccer goal between the lunar module landing pads, Buzz Aldrin even attempted a lunar slide not unlike the one depicted in that recent Geico commercial.

President Donald Trump said, “When I say mankind is going to Mars, I am not talking about some Hollywood mock version. I have some connections over in India and the folks at Bollywood. We might even have Matt Damon growing some shit potatoes. It’s going to be the best Mars landing!!”

When the Hal 9000 was asked to release the unseen footage of the Kennedy assassination and from 9/11, it replied, “I’m sorry, Zano, I’m afraid I can’t do that.”

In related news The Kubrick Foundation admits “the whole 2001 monolith-thing was phallicly Freudian in nature.”