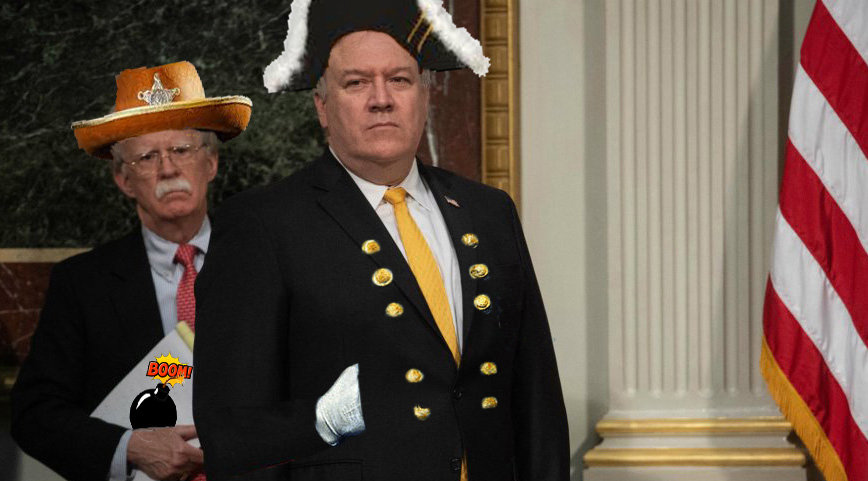 Two key GOP factions have emerged in recent years, the greedy part and the eager-to-blow-shit-up part. Both sides seem determined to lead our country to ruin. It’s like Death Race 2000 only there are no points for running people over. In fact, there are no points to it at all. As things escalate with Tehran, many believe our president represents the best chance to keep the warmongers within his own administration in check. Whereas there’s some truth to that statement, it’s not horribly comforting. There’s a difference between a firewall and a dumpster fire. It’s kind of like having the eight year old watch the four year old …except neither of them are that old.

My overarching prediction, hatched during the Bush years, involves the next conservative in chief breaking our republic outright. Certainly part of that glum outlook stemmed from an expectation that a post-Obama Republican president would end the Iran deal and then pull out their favorite instruments, the war drums.

“Trump would also stop the Iran deal on day one. Republicans would choose to let them move toward a bomb, which, in a few years, would force another escalation/conflict/occupation.”

[Correction: it took more than a day.]

This week Trump said, “We just don’t want them (Iran) to have nuclear weapons, it’s not too much to ask.” Yes, it actually is now. We had that covered, under Obama. All future negotiations will be deemed impossible and pointless with those untrustworthy Americans and who can blame them? How do you lose the higher moral ground to the Ayatollahs? Strong work.

Do you understand the international community’s view of the Iran Deal that you ended? Or their nuclear experts’ assessment of the effectiveness, Mr. President? Do you even know the scratch-n-sniff highlight reel? It’s astounding how Trump, the archetypal Fox News viewer, is now running the country wholly devoid of anything resembling facts. Today, all right-wing knowledge of any subject must fit into the Twitter feed character allotment, or it’s Fake News! In their defense, Twitter did recently increase their characters from 140 to 280. At this rate the GOP will be out of elementary school just in time for the apocalypse. Nuke ‘Em High?

Meanwhile, Nancy Pelosi is flexing her muscles and reminding the administration that only congress can declare war. How quaint. The executive branch has way more leeway with our military than they should. The 21st century congress workaround is this: don’t call it a war and implement the authorization of use of military force. It’s really not that new although our leaders, D or R, have had it on speed dial in recent years. That which we call a conflict by any other name? An old Atlantic article discusses the more recent occurrences and adds that presidents have used force without declaring war over two hundred times in our country’s history.

As for any Trump-hatched ‘strategery,’ the role of congress resides on the anemic side of impotent. Trump and his cohorts can easily start a confrontation and get us on a clear warpath footing, wholly unsupervised. When has a Republican ever needed your permission to F-things up? When Iran starts attacking our soldiers, equipment, and ships, uh, how do you suppose the vote in congress will go down then? Declaring war will be a mere formality. I can see the Trump war tweet now: “I’m sending two more aircraft carriers to the Straights of Hormuz, Nancy, what do you want to call it when we start exchanging fire? #ConflictOfDisinterest.”

This is why we can’t have nice things.

To Trump’s credit he’s not an overt fan of war for war’s sake, which is practically a dis-qualifier. He said only two things I agreed with during his campaign: “Big Pharma bad!” and “War bad!” Although, he said this somewhat more eloquently at the time, two more syllables eloquently. Per Forbes the president’s latest cave to Big Pharma occurred way back yesterday and involved Bush’s unfunded Medicare-D program. As for avoiding “stupid wars” he recently made John ‘Bomb Shit’ Bolton his National Security Adviser and he’s now shocked the man wants to bomb shit.

Secretary of State Mike Pompeo and John Bolton were the brains behind the recent decision to designate Iran’s Islamic Revolutionary Guard Corps as a terrorist organization, a move at the heart of the recent escalation in tensions between the U.S. and Iran.

“It’s intended to help the U.S. crack down on businesses in Europe and elsewhere controlled by the IRGC, the officials said. But Pentagon officials, including Marine Gen. Joe Dunford, the chairman of the Joint Chiefs of Staff, have cautioned against the move, several U.S. officials said, fearing it could lead to a backlash against U.S. forces in the region without inflicting the intended damage to the Iranian economy. Central Intelligence Agency officials have also had reservations about consequences of the decision.”

For this unfolding Iranian drama Trump is the dove, Bolton is the hawk, and Pompeo is the chicken hawk. Our Secretary of State might have the hardest time waffling between the shittier impulses of both of these volatile figures. Trump is downplaying differences of opinion within his administration. Here’s the imaginary Trump tweet: “I just like to bloviate and bluster, Bolton’s always bomb happy, and Pompeo is looking for a fight only on weekends. But otherwise we’re on the same page. #SamePageDifferentBook.”

The neocon’s plan has remained fairly consistent over the years:

One would think, post Iraq, that even Republicans would be somewhat more squeamish for skirmishes. A few moderate Republicans, like Mitt Romney, are showing their reluctance for Regime Change: Part Deux. Others, like Marco Rubio, have already fallen into line, history be damned.

My concern is that Bolton wants his war and the president, if challenged, is not going to want to appear weak. This is a potentially deadly combination. Our National Security Adviser could easily corner Trump in this scenario. Were our president to fire him, right now, that dangerous dynamic would be alleviated.

It’s as if the Bush years never happened for these people. What could possibly go wrong with the next attempt to plant some democratic magic beans? At the end of the day, even with all of our military might, the U.S. has way less control over true and lasting change in this region than we care to admit:

“The U.S. does not and never will possess the might to bend the people and powers of the world to our will. Hence we should not expend our blood and treasure attempting to do precisely that. The U.S. has interests, and it should defend them, with force when necessary. But those interests ought not to be defined so broadly that they extend to every corner of the globe, colliding with the far more powerful interests of those who actually live in those corners of the world.”

Hey, I have an idea: why not bungle us into war with Iran and call for a draft, Mr. Bone Spurs. That would end this little failed experiment and expose this country for the military industrial complex fascists that we have become. And let’s be clear, any and all deaths from the next unnecessary war will be placed squarely on your karma, Trump supporters. Ignorance only goes so far when there’s a death toll involved. The next one is not on the house …although, it might just be on the Senate.