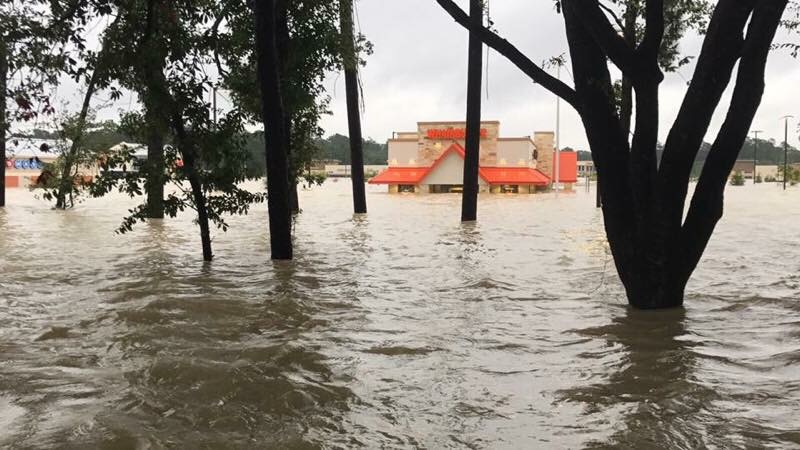 Houston, TX—Justin Russell of Bellaire remains trapped on a Whataburger rooftop since Hurricane Harvey savaged the Houston area last Friday. The man claims to be struggling with weight gain, lethargy, and excessive flatulence. He told the Discord, “Look, I’ve watched the film Supersize Me, so I know I don’t have a lot of time! I can feel my arteries hardening as we speak. I tried to catch some fish with a snelled onion ring and some Whatachick’n bites, but the Metro Houston fish still seem spooked. I am on the top of the Whataburger on 4th! The message on the roof says Send Whole Foods! You can’t miss it.”

Mr. Russell claims to have fried up as much of the food as possible before the flood waters crested the facility’s equipment. He then retreated to the roof with as much of the value menu as he could muster. Speaking of muster, he reports the restaurant is out of muster. When asked how he became trapped, Russell explained, “I was just grabbing a bite with my kiddo, but normally I avoid foods like this.” When asked about the whereabouts of his child, he said, “Do you remember that movie with those soccer players that got trapped in the mountains of Brazil after a plane crash? Yeah, well it was nothing like that.”

Mr. Russell also wanted to let the manager know, “Even though I don’t work here I did clean the deep fryer, which is now under water.”