I wrote a little rebuttal ditty, not about Jack & Diane. I just wanted to clarify some statements made in Tony Ballz’s recent article The Confederate Flag: Public Opinion Is Often A Petty Thing. Well, I want to take issue with one statement in particular:

“My defense remains the same: until fairly recently, the display of the rebel flag simply meant regional pride.”
-Tony Ballz

This is about as accurate as Trump on Immigration. The “rebel flag” is, most assuredly, a symbol of ignorance in that most Southerners don’t even know the history of their own “symbol of pride”. The Confederate flag, as plastered on countless Dodge Chargers and pickup-trucks, is not even the Confederate flag.

The flag we see was the battle flag of the Confederate Army of Northern Virginia which was subsequently used for a few other military units and even the Navy of the Confederacy. There were three Confederate flags in all (as seen in the below hijacked image):

Let’s go Ballz to the wallz and take a look at the real history behind where this “symbol of pride” comes.

The flags above are symbols of the Confederacy after the succession of seven states from the Union. Regarding this event the Vice President of the newly formed Confederate States of America described the need for their actions thusly:

“The new Constitution has put at rest forever all the agitating questions relating to our peculiar institutions—African slavery as it exists among us—the proper status of the negro in our form of civilization. This was the immediate cause of the late rupture and present revolution.
…
Our new Government[‘s]…cornerstone rests, upon the great truth that the negro is not equal to the white man; that slavery, subordination to the superior race, is his natural and normal condition.”

The Civil War started on April 12, 1861 when Confederate forces fired on Fort Sumter. This was an act of treason and of war. The Confederate flag as we know it today was created some six months later, October 21, 1861, by Confederate General Beauregard. It was a battle flag of the Confederate Army of Northern Virginia. It served as a rallying cry for that army, one that killed tens of thousands of American soldiers.

The following quote is a paraphrasing attributed to The Confederate Battle Flag: America’s Most Embattled Emblem, by John M. Coski:

“Beauregard gave a speech encouraging the soldiers to treat this new [battle] flag with honor and that it must never be surrendered. Many soldiers wrote home about the ceremony and the impression the flag had upon them, the “fighting colors” boosting morale after the confusion at the Battle of First Manassas. From that point on, the battle flag only grew in its identification with the Confederacy and the South in general.”

People often speak of slavery as some historical artifact that belongs in the past. I don’t think that most people really get what slavery was like. It was more than just forced labor. It was institutional torture, rape, degradation and murder. Of course we’re talking about mostly Republicans here, so don’t bother them with facts. They’ve already made up their minds.

“If a slave resisted being whipped, the bloodhounds were unpacked, and set upon him, to tear his flesh from his bones. The master who did these things was highly educated, and styled a perfect gentleman. He also boasted the name and standing of a Christian.”

—A Slave is Tortured, PBS

And defeat in the Civil War was the end of legalized slavery, but the South didn’t let this stop their persecution of blacks. Remember, the South shall rise again (a statement of treason, or at least an intent to foment insurrection). Until then, the Southerners moved on from slavery to lynching, while overhead, fluttering in the breeze, the ol’ Stars and Bars (well, the battle flag of the Army of Northern Virginia (TBFOTAONV) anyway).

From Terrorism in America: The Ritualistic Murder of Blacks, author Boz Hod writes:

“The actual process of lynching was morbid and incredibly violent. Lynching does not necessarily mean hanging. It often included humiliation, torture, burning, dismemberment and castration. Victims were beaten and whipped, many times in front of large crowds that sometimes numbered in the thousands. Coal tar was frequently used to douse the unfortunate victim prior to setting him afire. Onlookers sometimes fired rifles and handguns hundreds of times into the corpse while people cheered and children played during the festivities. Pieces of the corpse were taken by onlookers as souvenirs of the event. Such was the case when James Irwin was lynched on January 31, 1930. Irwin was accused of the murder of a white girl in the town of Ocilla, Georgia. Taken into custody by a rampaging mob, his fingers and toes were cut off, his teeth pulled out by pliers and finally he was castrated. It still wasn’t enough. Irwin was then burned alive in front of hundreds of onlookers. No one was ever punished for this barbaric killing. Black victims were hacked to death, dragged behind cars, burned, beaten, whipped, sometimes shot thousands of times, mutilated; the savagery was astonishing.”

Here’s a nice snap of a good ol’ Southern lynchin’. Smiles everybody, smiles! The kid has the right idea. 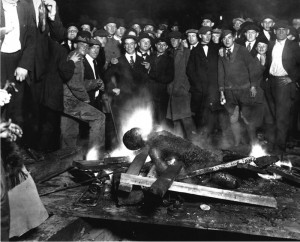 So, in their own leaders’ words, the Confederacy was founded based upon the premise that black peoples’ rightful place in our society was to service the white man, i.e. the superior race. The Confederate flag was created specifically as a rallying point for those that fought and died for that belief, and all of the treasonous activities included in do doing. This is not a Southern pride thing; it is a racism thing, kinda like Trump’s hair (it complements the finish on a 70s Dodge Charger nicely, doesn’t it?). Anyway, so, the next time someone bitches about taking down this “symbol of pride” from in front of our State Capitol buildings, let them experience “southern pride” first hand: throw things at ’em, take ‘em out and beat ’em senseless, cut off their genitals, douse them in tar, string up, light ‘em on fire and post it on Instagram. And don’t forget to cut off some body parts to take home for later. I hear that ears make nice earrings, and they come in pairs too.

The article I wrote here expresses, in short form, what I had to say on the topic. The article I would have liked to have written was already researched and written in much better fashion by a guy named Cameron McPherson here. I strongly encourage you to read it. I did, and then shamelessly stole chunks of it for this piece. There is much more there than I presented here.