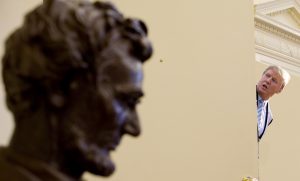 Tweet Tower—In an effort to cut both cost and interest, the White House tour is proud to announce a President Trump narrated audio tour. You can listen to our president go room by room and talk directly into your head about all the historical items that he believes can talk directly into his. The first historical item on the tour is the James Madison tea table, which Trump is convinced can not only read his thoughts, but has encouraged him to write and post slanderous tweets at two in the morning #libel.

When President Trump goes anywhere near this historic table, many staff and visitors alike have noted the president’s odd demeanor. He has even been known to stop talking mid-sentence, before just staring at the table suspiciously. Here’s an excerpt from the audio tour, “The table is bad. It’s a very bad table. I don’t know what George Madison was thinking when he bought that thing, but I can tell you this, those Vegas pawn stars wouldn’t give you ten bucks for that piece of shit. I can’t throw it out, because it’s a part of history, but I can put a bunch of blankets over it so it doesn’t keep staring at me #Badorsicktable.

President Trump then shares his concerns how the eyes of the portrait of Theodore Roosevelt seem to follow him as he crosses the room. “It’s like President Teddy Ruxbin, or whatever the hell is name is, is telling me, I’m watching you, Trump. I’m on Mount Rushmore and there’s not enough room on that mountain for the two of us. What an asshole! #WasTeddyTheCrip? #ScrewRuxbin.

The Trump Administration is also downplaying recent reports of damage to the bust of President Lincoln. The following is another audio tour excerpt: “If you look to the empty pedestal on your left, this is where the bust of president Lincoln used to be. It’s not really broken that bad. I was just looking for a microphone that I believe was lodged in the left nostril by aliens. “Hey, and it’s already called a ‘bust’, am I right?”

Both Fox News and Russian hackers have since corroborated the President’s story about alien surveillance.