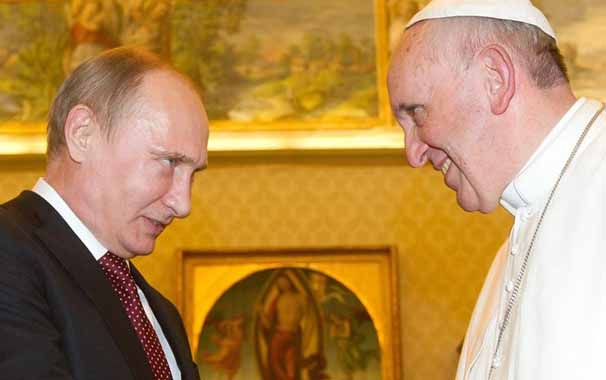 Moscow, RU—After being late for their first meeting, Russian President Vladimir Putin asked the Pope to be his guest at the Kremlin. The Pope agreed but unfortunately Putin arrived even later to greet His Holiness for this second meeting. Bored and frustrated, the Pope allegedly tore down a tapestry of Putin, broke an ornate clock in Putin’s likeness, and then threw a bust of Putin out of a second story Kremlin window. Russian officials have confirmed the plunging bust did, in fact, damage the nose of a statue of Putin in the square below.

Putin’s tardiness is legendary as he was 14 minutes late to greet the Queen of England, three hours late to greet Secretary of State John Kerry, and a whopping five weeks late to greet a pair of Jehovah’s Witnesses, who incidentally were never seen again. Some believe the Dalai Lama is still waiting in a little café just off of Red Square, as Putin allegedly “promised to pick up the tab.”

Using secret diplomatic channels, President Obama encouraged the Pope to ask if Putin got his Facebook birthday eCard. “Unfortunately, we never got to most of my agenda,” explained the Pope. “But I felt a lot better after breaking shit.”

Many found Putin’s explanation for the second delay concerning as he told the press, “When you release a political enemy, Hunger Games-style into the Nature Arena, it is not always going to end as quickly as one would like. For me, that is part of the enjoyment of the sport. It’s what keeps me going, well, that and annexing shit. I love annexing shit. It keeps me youthful…Hitler youthful. Get it? You should see the potato I carved into the shape of a penis. I’m here ‘til Friday, folks! Kidding, I’m a lifer. ”

After discussing current events, the Pope also hoped to pitch several business ideas to Putin. “I wanted to tell him about my idea to have Russia and the Vatican combine forces on something I call PutinPopes. They’re ice cream PopeSickles. Get it?”