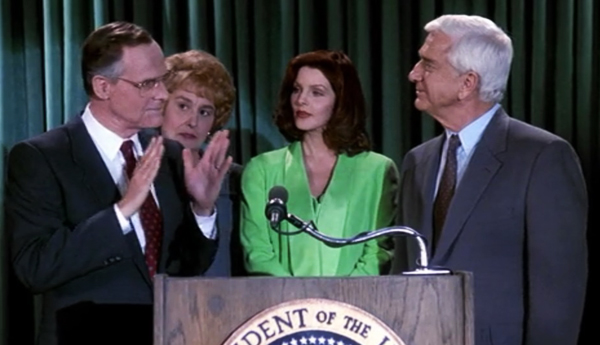 Tweet Tower—Lieutenant Frank Drebin of Police Squad will become the 8th director of the Federal Bureau of Investigation. Press Secretary Sean Spicer made the announcement today from behind some bushes. Drebin has served over 20 years on Police Squad and, speaking of bushes, he received a special commendation of valor by a man playing George H.W. Bush in the movie the Naked Gun 21/2 : The Smell Of Fear.

Press Secretary Sean Spicer told the press today, “The president has the utmost confidence in Lt. Drebin and, even though the president hasn’t been able to watch all 6 episodes of Police Squad, he has seen most of them—or at least part of most of them. Drebin has personally solved more cases than Scooby Do on a pile of meth-laced Scooby snacks. No really, that’s a presidential tweek …uh, tweet. That’s not to mention all the cold cases Lt. Drebin has taken care of, likely on a beach somewhere.”

Lieutenant Drebin told the Discord today, “I am honored to be part of an organization with such a proud history, not the J. Edgar Hoover cross-dressing part, or the Kennedy assassination cover-up part, or even that Abscam scandal that I believe inspired that Genesis song, no, I’m talking about that same bureau that kept Mulder and Skully running around in circles for nearly a decade. I can assure all of you, right now, that intend to keep the alien-human hybrid program on track and away from meddling eyes.”

The rest of Drebin’s speech has been deemed classified and/or silly.