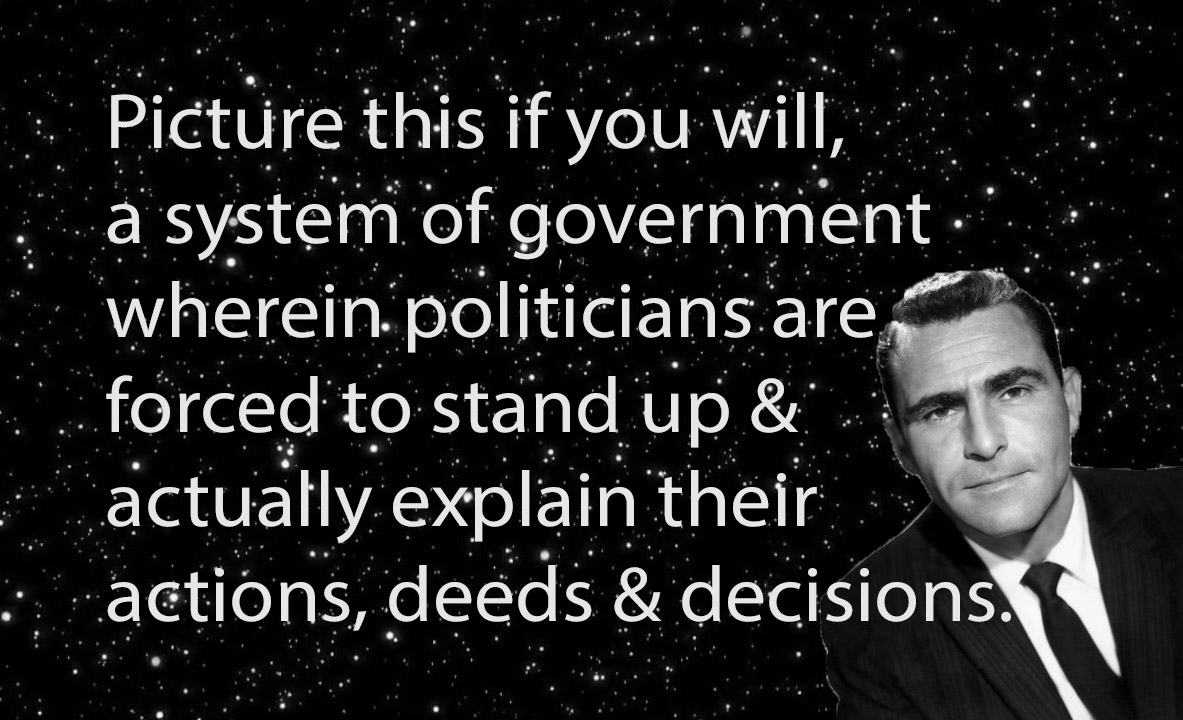 I even looked up his middle name, but it’s just Paul. Really? Why not something like Tiberius? Anyway, all Nigel Tiberius Farage jokes aside, I’ve floated the idea of switching to a parliamentary-style government (PSG) several times on this blog. It’s never going to happen, of course, because embracing such a shift would involve insight, which Trump already outsourced to China before promptly starting a trade war. The Republicans would be the most hostile to such an idea, primarily because for them:

Put another way, whereas a Bill Clinton or a Barack Obama could and would successfully navigate such an intense think-on your-feet forum, as for our Republican friends? …er, not so much. Conservativism is unjustifiable when exposed to the elements, and the last few savvy conservatives like Mitch McConnell are probably painfully aware of this fact. Today The GOP is nothing more than a front for a criminal organization, but how broken do things have to get before we even consider a plan B? This one’s easy! Never.

In a small gesture to propel this new and exciting chapter of my resistance movement, I’m changing my FB profile to The Real Nigel Farage. Please follow, like, and/or subscribe (whatever one does in these platform thingies).

[Winslow: The reason we only have 11 fans is becoming apparent.]

Sure they’re having their Brexit woes at the moment, which was the result of a popular vote, but their system itself has always impressed me. There’s a lot of merit to adopting a PSG model. For one, there’s room for other parties, factions, coalitions to exist within this framework, thus breaking us from this two party choke-hold on reality. Furthermore, it would force a mirror into the hands of The GOP, moving them either toward reform or obscurity, whichever comes first.

Adopting such a system, right now, could potentially save us from ourselves. It would all but end the gridlock in Washington as a parliamentary system is designed to still function within serious ideological divides by circumventing all bottlenecks. Those Brits can’t agree on anything, but they do it in the House of Commons with a certain panache, don’t they? And, no matter how split the politicians are, the legislation get its day in court. And, what’s enacted into law is more easily overturned if proven to be ineffective or shitty. I think the only thing the House of Commons was anonymous on in recent years was its decision to not allow The Donald to address their assemblage.

Per The Week the following evoked some “rare” applause from the House of Commons:

“As far as this place is concerned I feel very strongly that our opposition to racism and to sexism and our support for equality before the law and an independent judiciary are hugely important considerations in the House of Commons … I would not wish to issue an invitation to President Trump to speak in the Royal Gallery.”

What intrigues me most about the PSG model is the vote of ‘no confidence.’ When the American autopsy is conducted, soon enough, our historians will take a long hard look at Dubya and Trump. Before Trump was even a trickle in Reagan’s economy, I’ve always looked at these last two Republican administrations as our democracy-ending bookends. We were locked-in place amidst a stunning level of incompetence. Granted we electorally asked for it, but at some point during both of these administrations it became painfully obvious that we needed an eject button, or maybe those sharks with the frigg’n lasers on their head. At times fixed terms have clearly worked against.

In this model the executive branch is not wholly a separate entity but rather an extension of the majority party. The current system, complete with state television news, has allowed conservatives to create an alternate universe, which, if left unchallenged, will end this experiment outright. A parliament would force The Twiright Zone to tack back toward reality.

Under Republican rule we are past the polarization point of no return and, as rosy as things seem at the moment, we are fast approaching the economic badlands.

What?! No one is saying this, Zano?

Yeah, when has that stopped me from being right about shit? And the world won’t stand for a second U.S.-led global collapse, nor should it. Worst case scenario, what emerges on the other side may not involve U.S. currency as the world standard. Hell, it may not even require our participation. The gig will be up. The question is, are we going to just let this happen? 401KO?

There seems to be no way of exorcising this evil. The less competent the conservative brand becomes the more people really seem to dig them. And I am telling you they would never survive the heightened scrutiny of a parliamentary style government. Not to mention, it would be entertaining as hell.

The right wing today is like when you sniff glue: the decisions get worse, but there’s a real euphoria associated with the process, so you keep doing it until one day your investigating the investigators, wielding tiki torches, and noshing on luke-warm hamberders in the oval office.

And I’m sick of hearing, Just wait for the next election, Zano. We needn’t wait for the other horsemen to saddle up. Death is completely booked and famine called in sick because he helped himself to Pestilence’s brown bag again. Each day I grow closer to wanting the revolution …a revolution that my terminally bewildered millennial friends will never put down the controller long enough to wage.

A war with Iran? The continued spiking of our economic disparity? The continued destruction of our environment? Let’s talk about this, out loud, in some parliamentary version and expose the Mitch McConnell’s of the world as the villains they truly are. Hope springs eternal.

Dare I rally my 11 followers to take up arms against the establishment? Now that’s power! Because my revolution goes to 11! And, besides, I should really be in bed by then anyway. Can’t stay up all night revolutioning and what not.