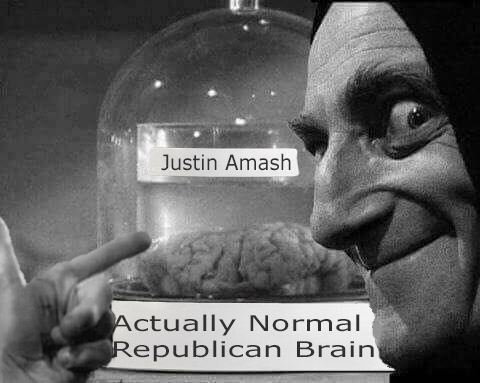 Grand Rapids, MI—Republican congressman Justin Amash (R-MI) has not only read the Mueller report in its entirety, stunning in and of itself, but he has concluded the president has engaged in impeachable offenses. The news has both Democrats and the scientific community scratching their heads. Since his public declaration on Monday, congressman Amash is awash with requests to have his brain studied by science, preferably post-mortem. The discovery has many political scientists and neuro-beurocratologists begging the question, how could someone who can process information still be a registered republican? It’s like Catch-22, only worse. Yeah, it’s like a Catch-23.

Dr. Sterling Hogbein, of the Hogbein Institute and Lube, said, “Does Justin Amash represent a bridging political species, a congressional outlier, or the ideological missing link? Until we can study his brain, it’s anyone’s guess. I guess A and C. Science is willing to wait patiently until he triggers impeachment proceedings, but, right after that happens, someone hand me the bone saw.”

More mainstream political anthropologists are refuting Hogbein’s theory. They argue that John McCain represented the last common political ancestor between liberals and conservatives and that the congressman’s recent aberrant behavior can likely be attributed to delusions, huffing inhalants, or an acute case of the Mondays.