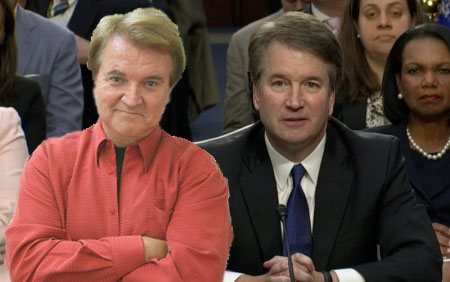 Trump’s Supreme Court appointee Brett Kavanaugh’s senate confirmation hearings are over …no questions answered. Republicans are throwing all caution, fairness, or logic to the wind to get this judge confirmed before their president is arrested or impeached (or both). This move for more power could end up coming with a hefty price tag, but Brett represents their perfect appointee. Let’s review the impressive powers of deduction behind this monumentally piss poor choice:

10. Who needs the women, minority, youth, or educated voters to win elections? (See: the Electoral College.)

9. Because one more conservative SCOTUS pick and we’ll have a gaggle.

8. While working for Dubya, Kavanaugh couldn’t possibly have done anything worse than Cheney …right? (Don’t release those documents.)

7. The most unpopular nominee in thirty years must be doing something far right.

6. Only 71% of United States citizens support legal abortions, but the rest of their bronze-aged base will remain Trump strong.

5. He would have been very popular in the 1930s German political circles.

4. We can’t allow America to become more progressive than the Pope, or Ireland.

3. When Kavanaugh overturns Row vs. Wade maybe we can make some extra cash opening a chain of back alley abortion ‘clinics’ (chain sold separately).

2. The average Republican voter is 79, so why fret too much about the future? (Rapture accessories sold separately.)

1. He totally has the same barber as Second City Television’s Dave Thomas!